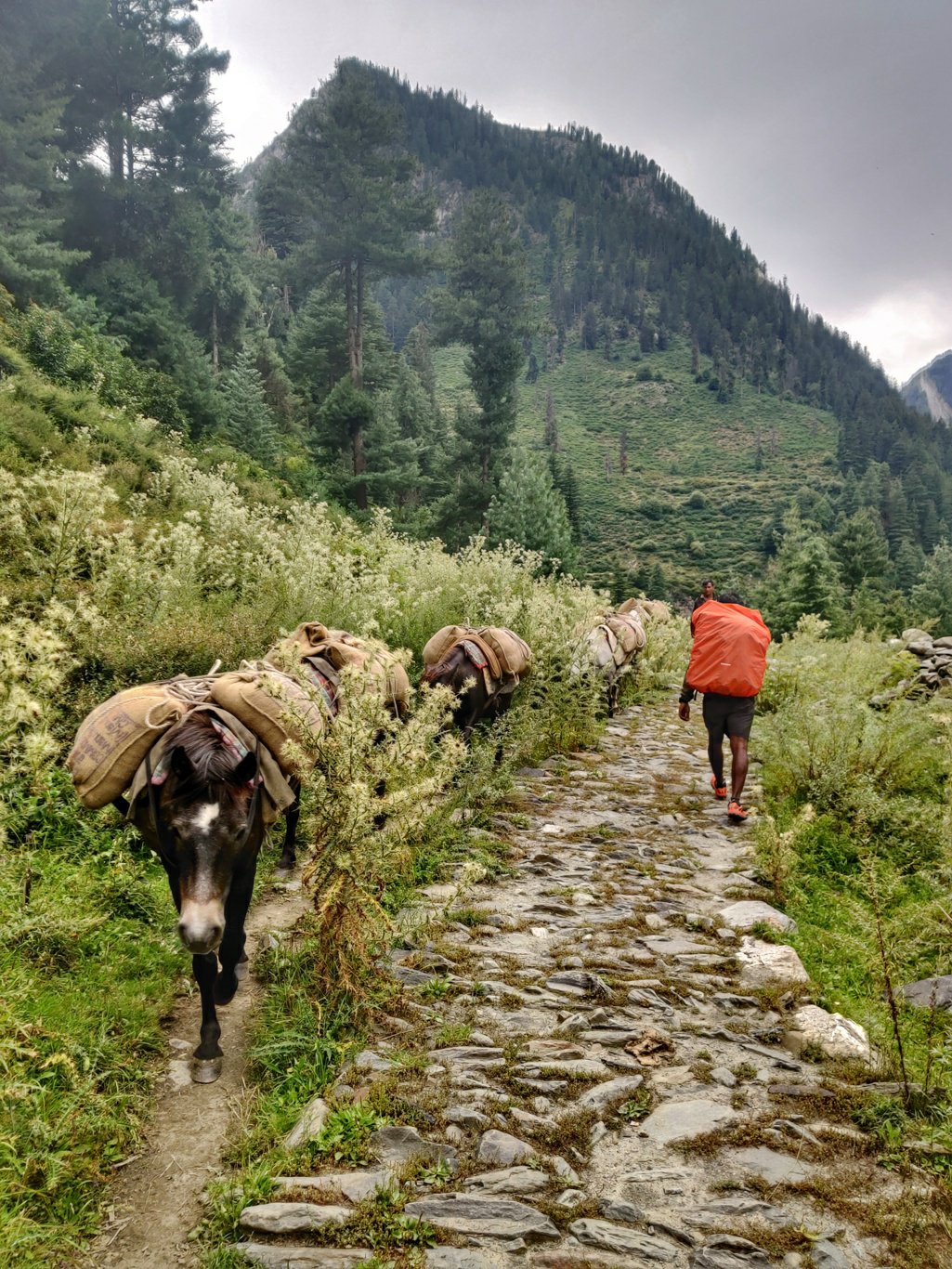 We started off from Bara Bhangal after noon after exploring the Ravi River valley during the morning. As we walked towards the Kaliheni Nalla horses were carrying ration to the village which had come across the Thamsar pass. This was the only way for goods to reach Bara Bhangal – recent landslides had destroyed the trail after the Kaliheni pass and the trail downstream along the Ravi river valley was too steep and narrow for horses. 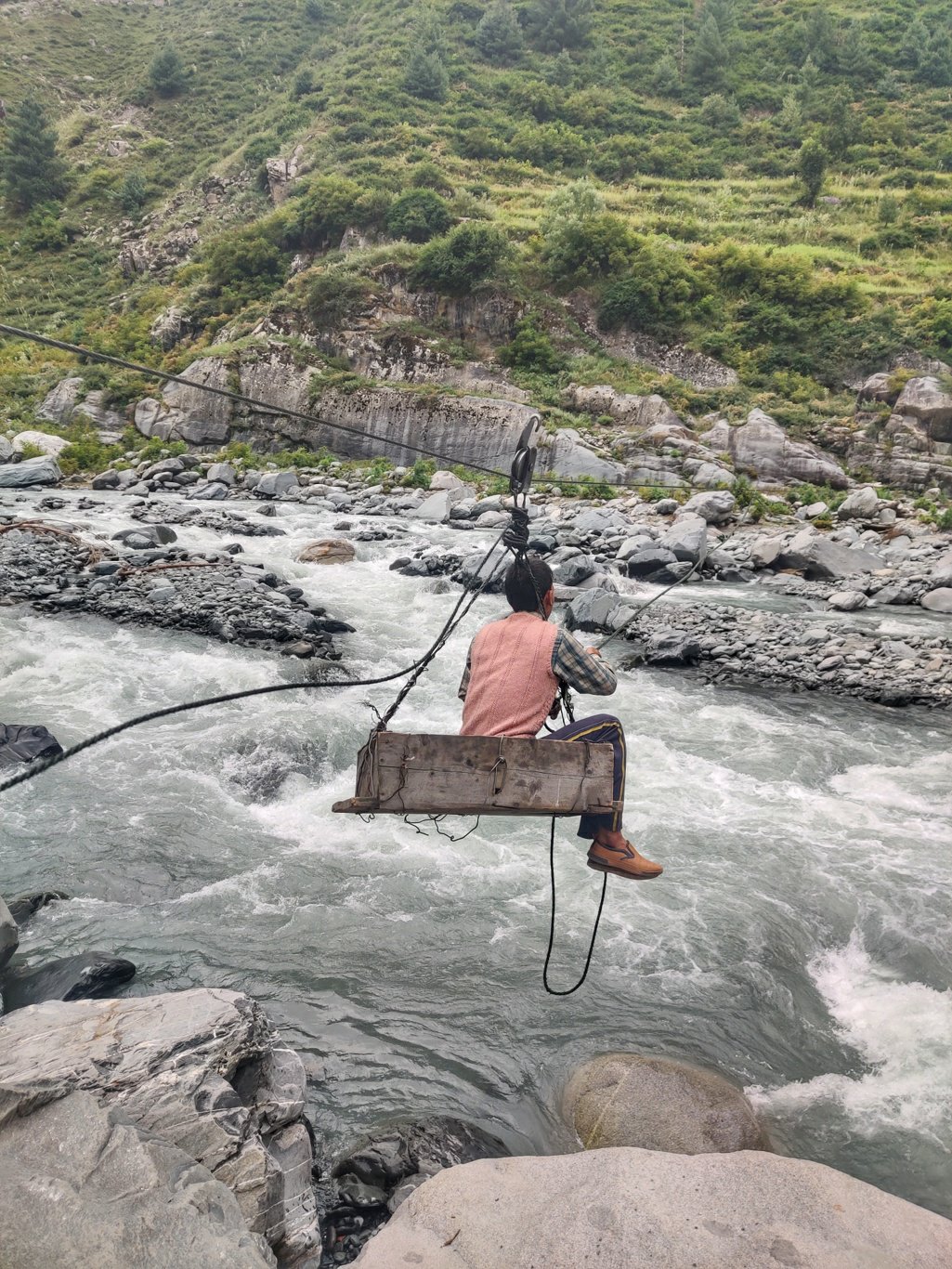 The bridge across the Kaliheni Nalla which I had crossed the previous year in 2018 had been washed away. Villagers now had fixed a steel cable with a manual pulls to move across people and goods. Horses coming down from the Thamsar pass had to unload their goods at the other side of the river to be pulled across and loaded onto other horses at the Bara Bangal side. We sat down in a small cart and pulled ourselves across the dangerous stream currents of the Kaliheni Nalla to the other side from where the path leads up to the Thamsar pass. 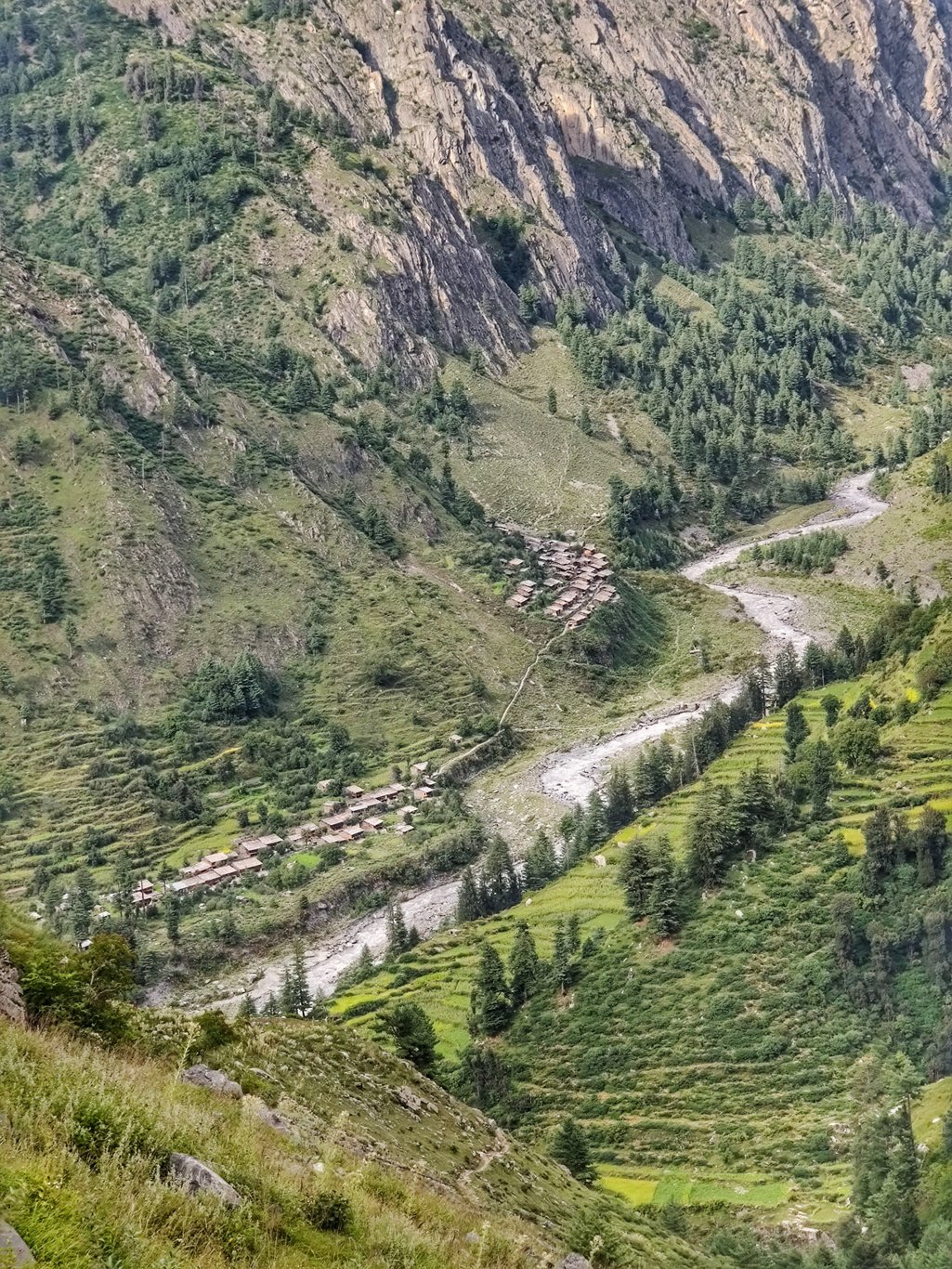 The path is wide and hair pins up steadily as it’s meant for horses. Soon we are high above the confluence of the Ravi and Kaliheni rivers with beautiful birds eye views on the settlement of Bara Bhangal in the wide open valley below. After an initial steep climb the path gradually ascents above the Thamsar Nalla which flows from the glacier below the pass. As the valley slope becomes steeper the trail switches sides of the river to the more gradual slope. 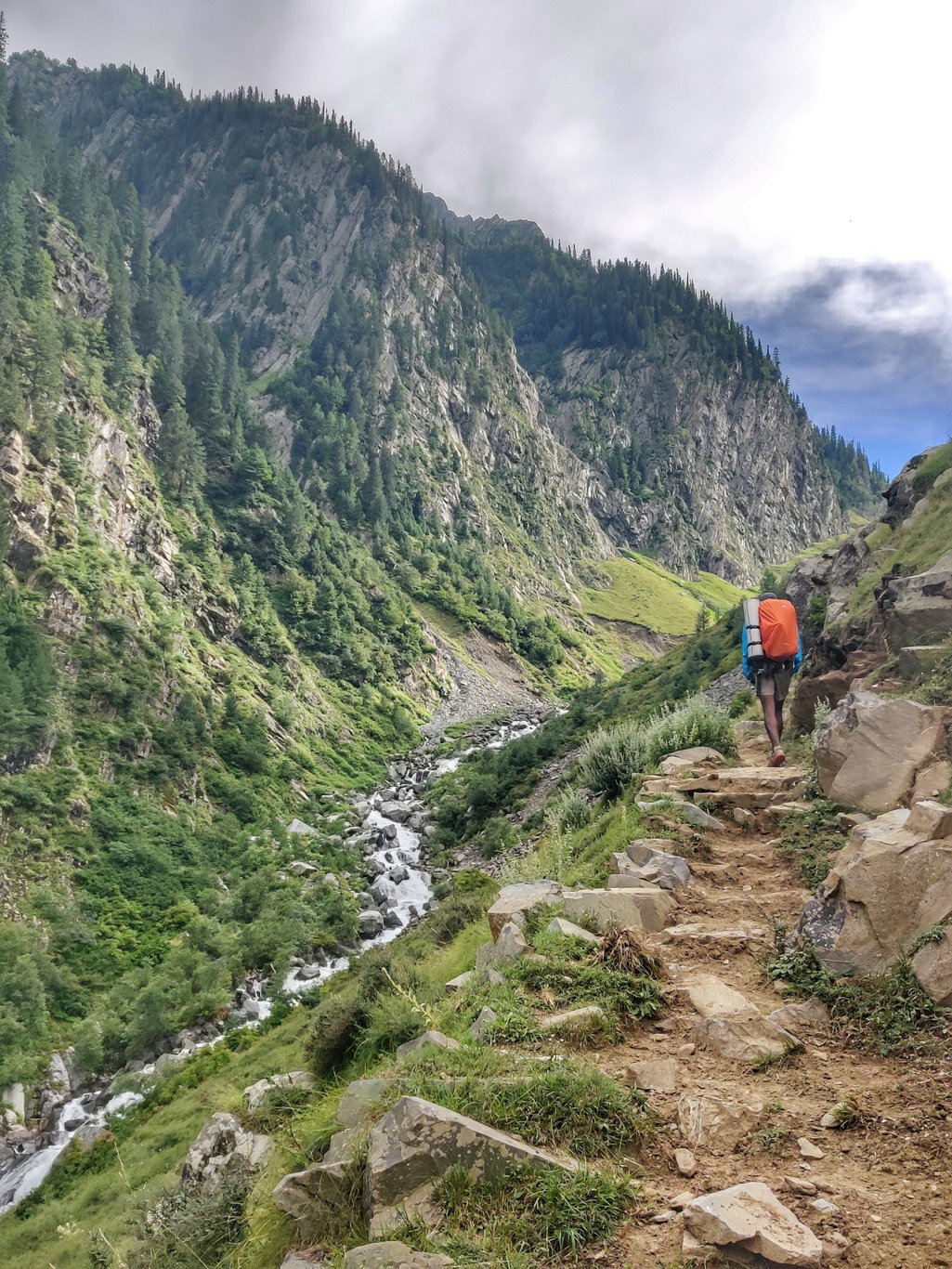 Here we cross the Thamsar Nalla which although being a relatively small stream – due to recent rains – was in pretty heavy flow. We picked up a stick and searched for the best place to cross the stream where it’s wider and less steep and water current would be less. A stick greatly improves stability as you move across the uneven river bed pushed by the water. With every step you only have two points of contact left – your other leg and the stick. 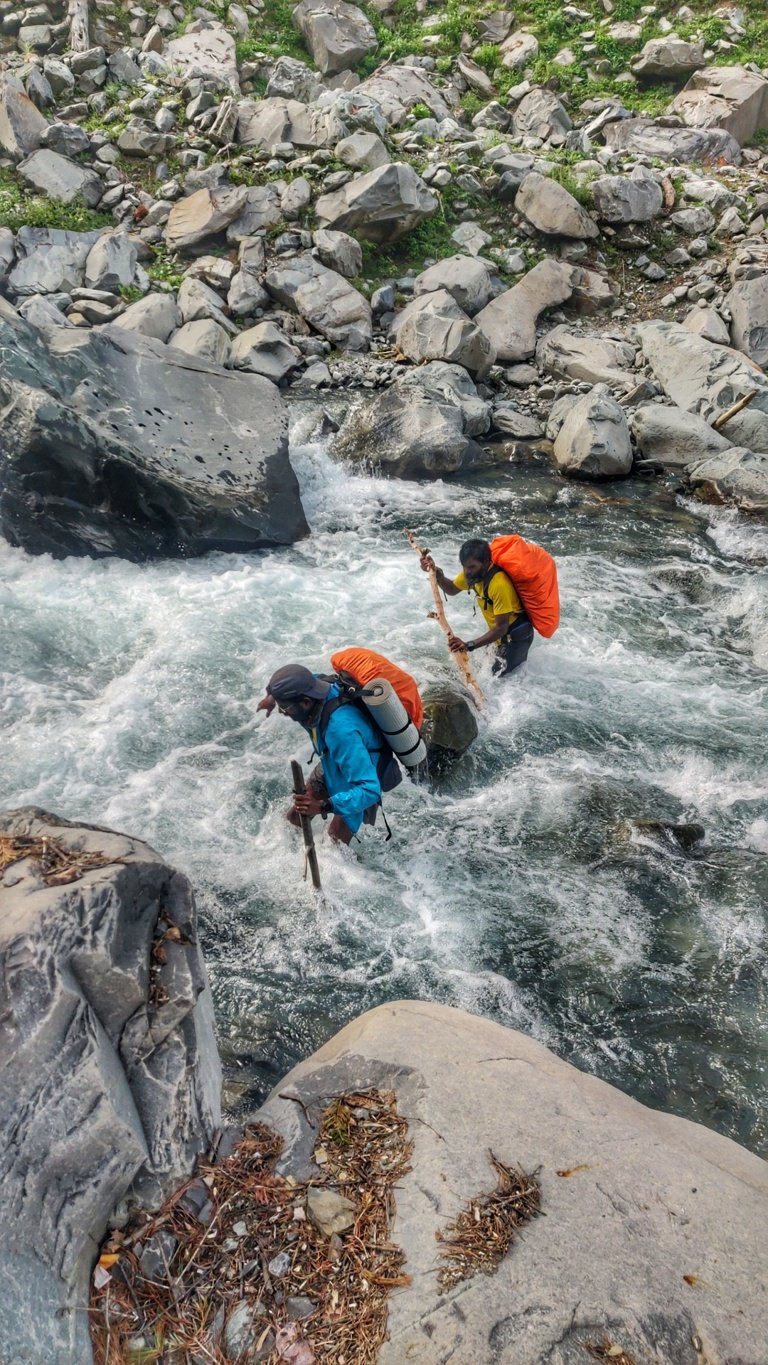 After crossing the stream the path climbs up through lush green meadows and white flower plants. Far and deep behind us we see Bara Bhangal nested at the base of the massive rising high ranges of the Pir Panjal. The vegetation is quite thick and high at the end of the summer hiding the trail in some places. 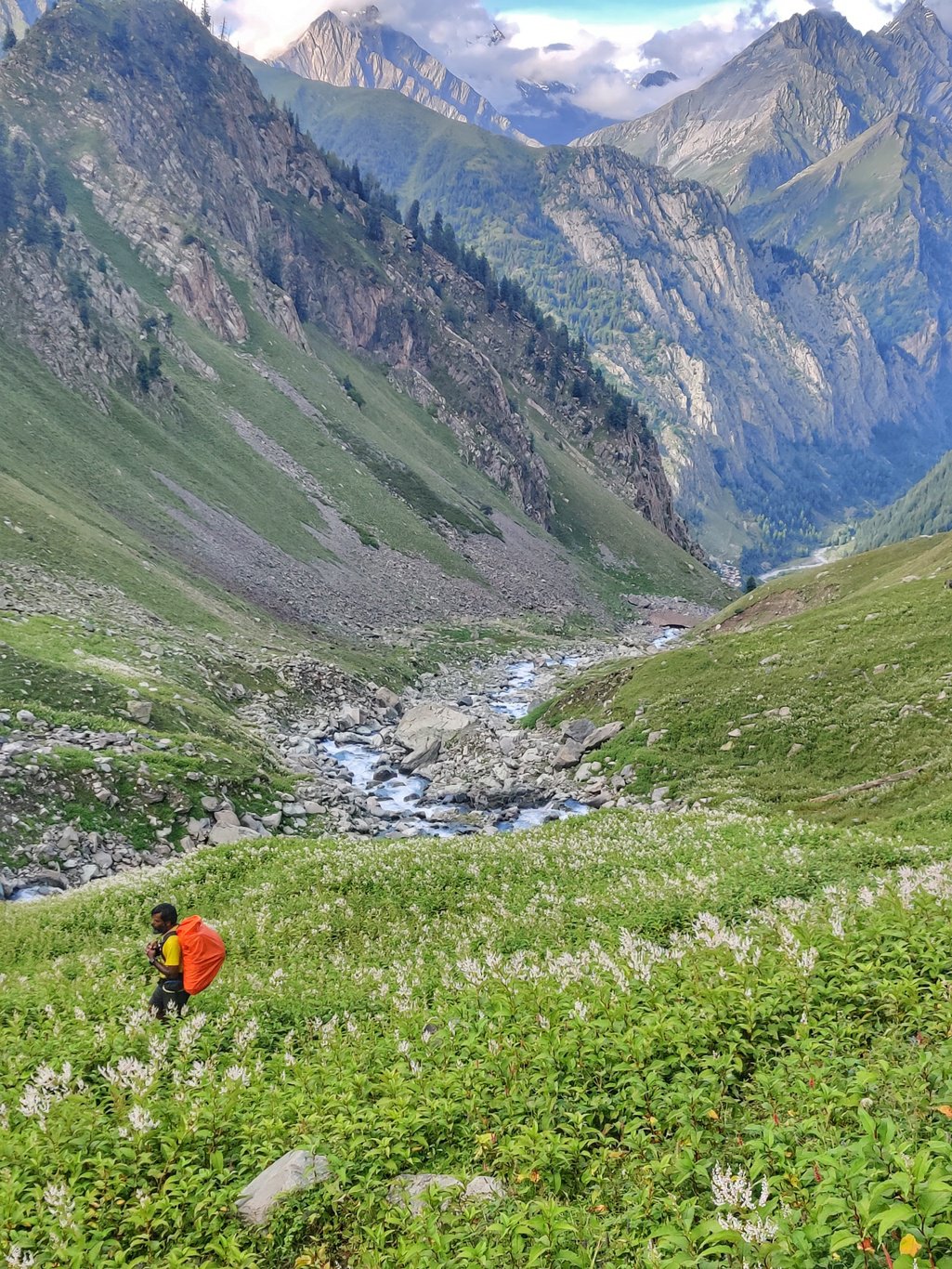 Further up we see numerous horses grazing freely in the meadows. These must be part of the group which carried rations to Bara Bhangal and was now on their way back. As the horses were going about freely the horsemen would be camping nearby. As it was already early evening we decided to also halt for the day and make an early morning dash to the pass the next day. 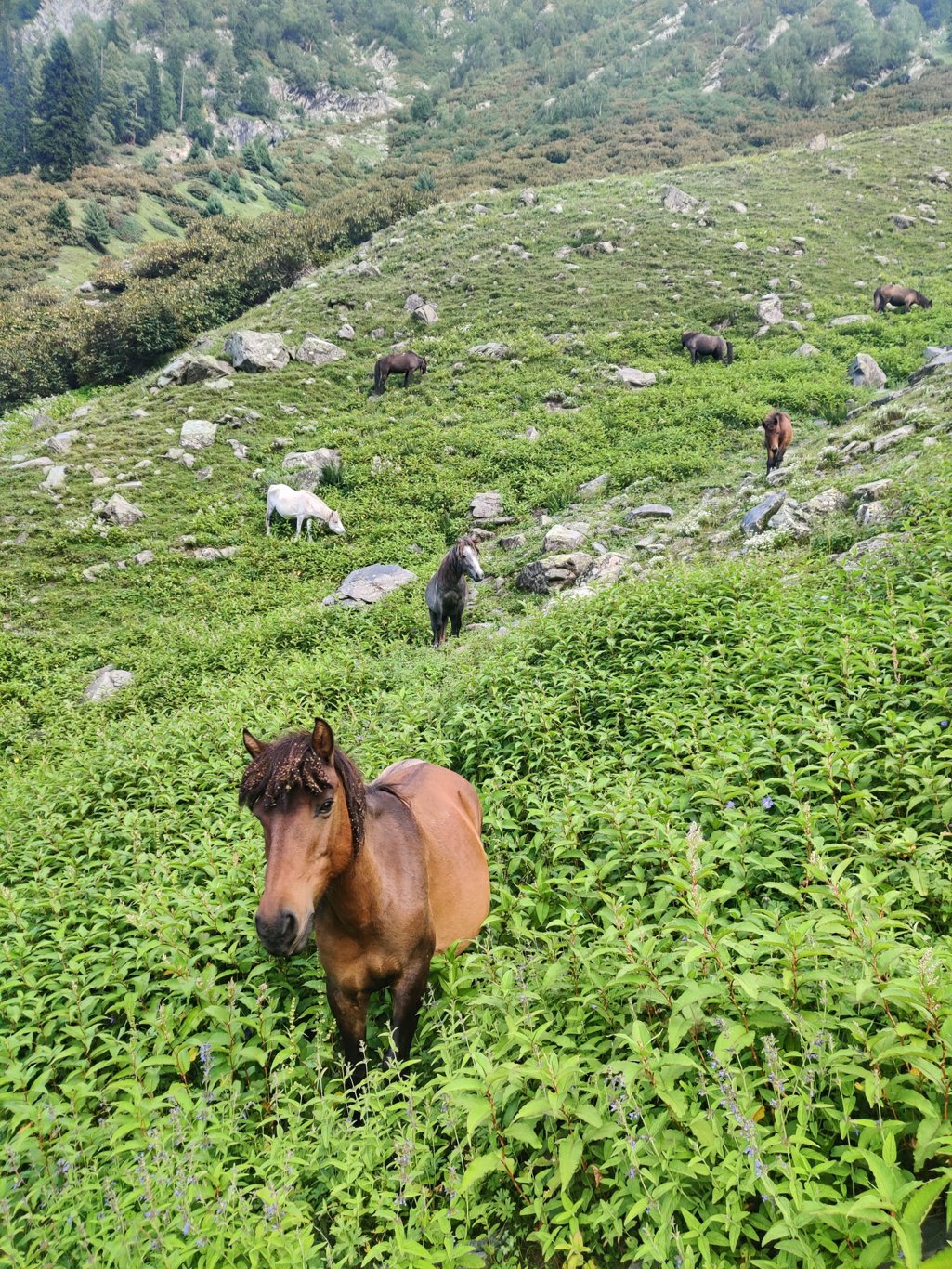 The horsemen had settled down in a nice flat space and were cooking dinner. They had offloaded the wooden saddles and luggage from the horses: blankets, tarps, cooking gears for the campsite. They had also carried firewood with them to cook and make a campfire. They used two bigger wooden logs to tie a rope and spread the tarp across it to make a campsite out of the rain and cold night wind. 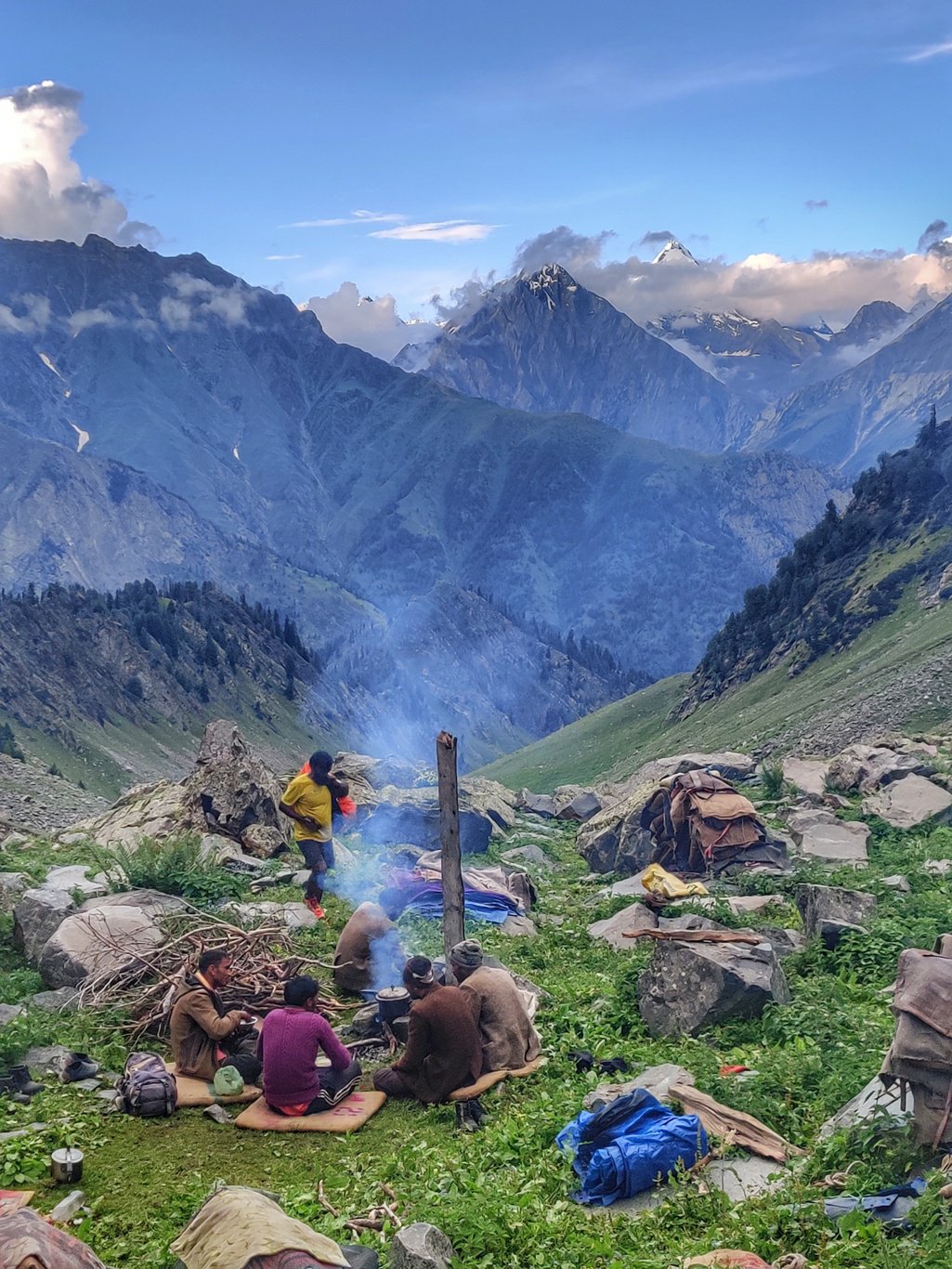 We cooked our Maggie noodles on their fire and had our dinner after another long day of hiking. The skies were turning orange and red as the sun was setting reflecting beautifully on the ever changing cloud cover above.  The clouds were caressing the high ranges where the heavens and earth appeared to meet and create the ever changing weather. As the night fell it became peaceful. 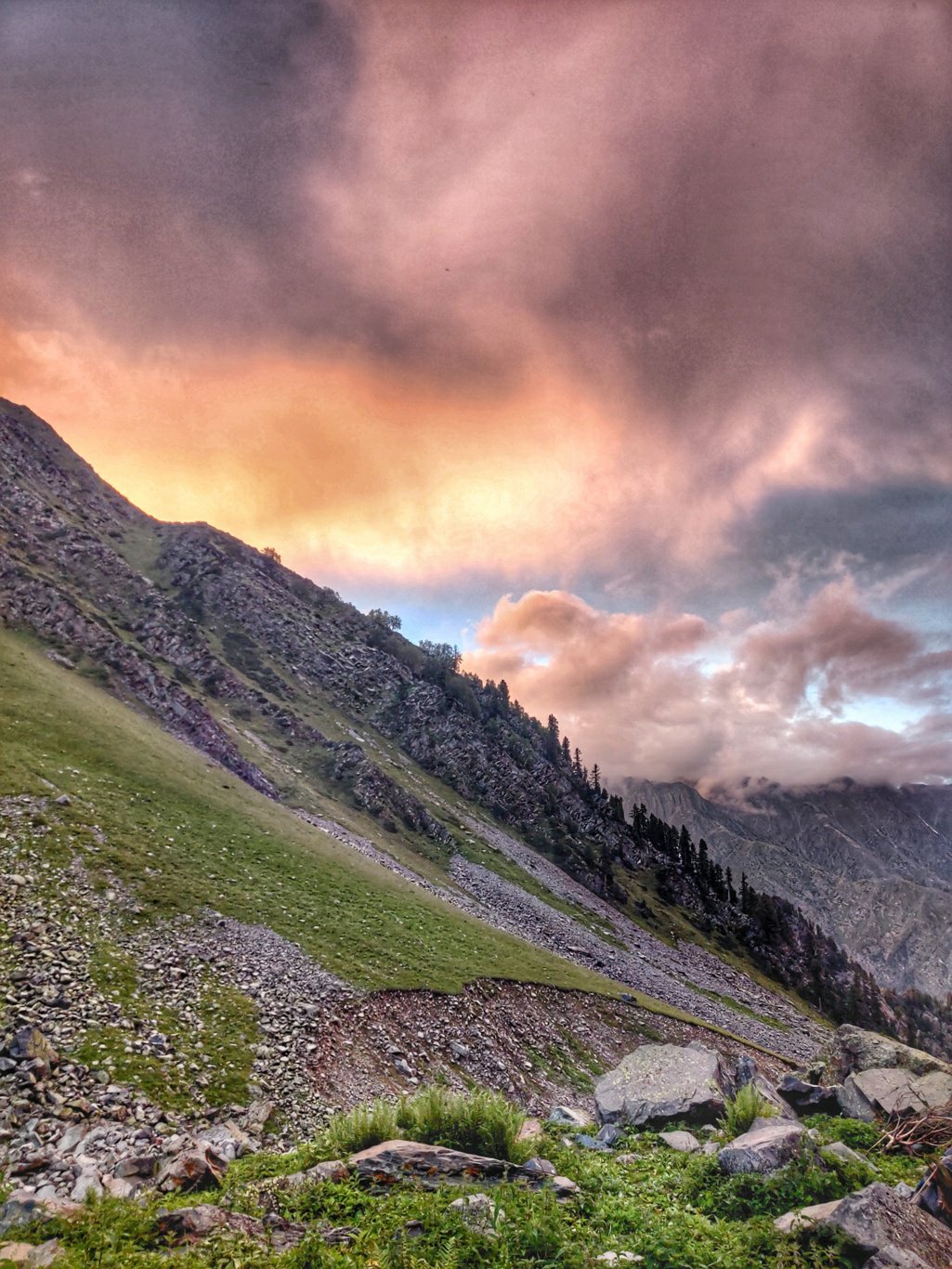 We sat down around the campfire to warm ourselves as the temperatures were dropping fast at 3500m altitude. We had put up our campsite in a flat space behind a huge boulder to break the cold wind blowing through the open valley.  We slept off peacefully rolled up in our warm sleeping bags beneath a tarpaulin sheet. A tarp of 500 gram is so much lighter than carrying a 2.5 kg tent in this steep terrain. Every 100 gram counts. 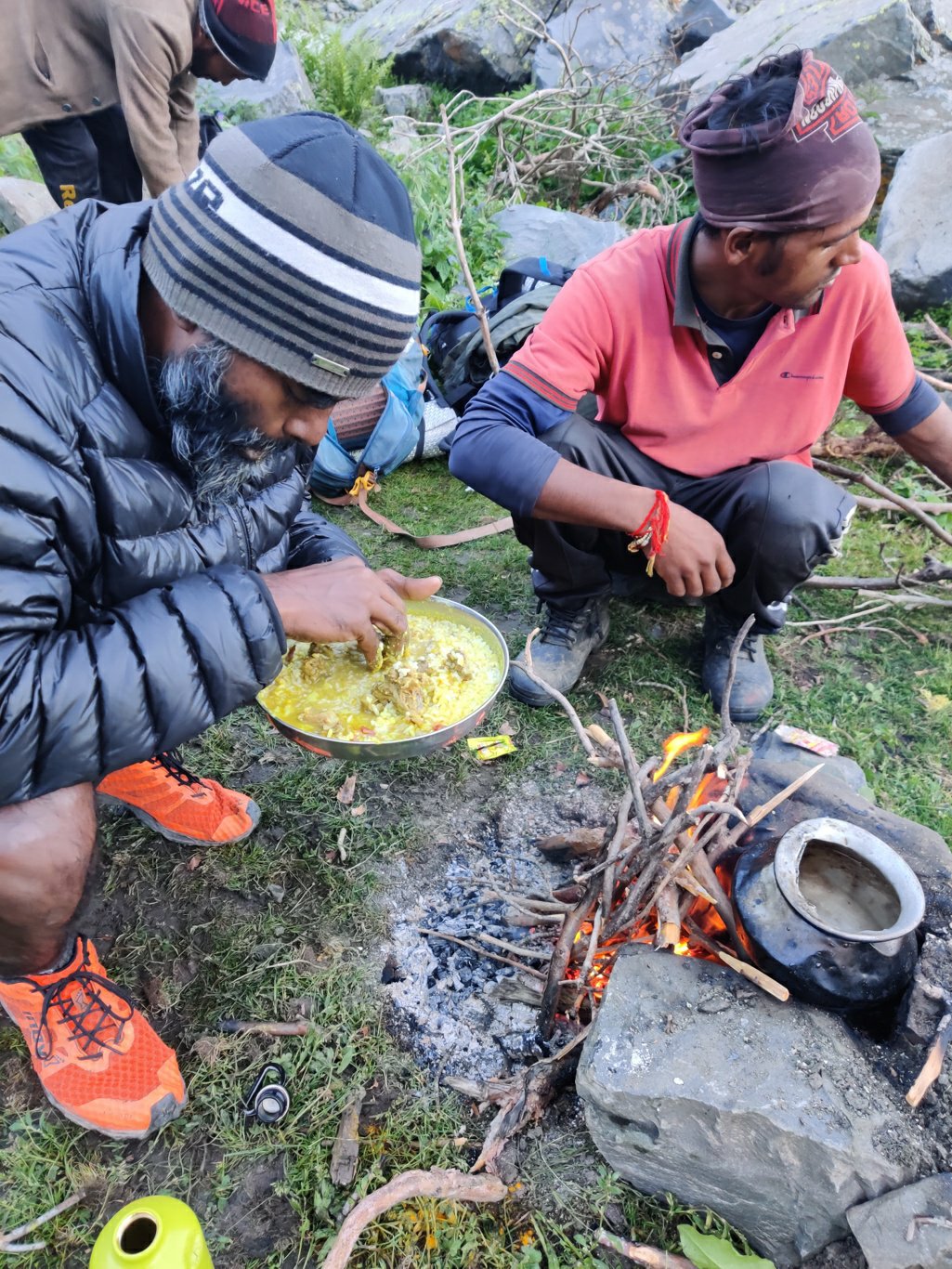 The next morning we woke up as the horsemen were breaking up camp early morning. We cooked some quick white oats and packed up our camp. Ready to go for a 1200m climb to the Thamsar pass at 4730m altitude. We soon left the meadows and entered into a world of rock and ice. Initially we traversed across moraines and scree below the glacier. The horses were moving fast across this treacherous terrain finding it difficult to keep up with them while trying to capture the changing landscape that was unfolding around us. 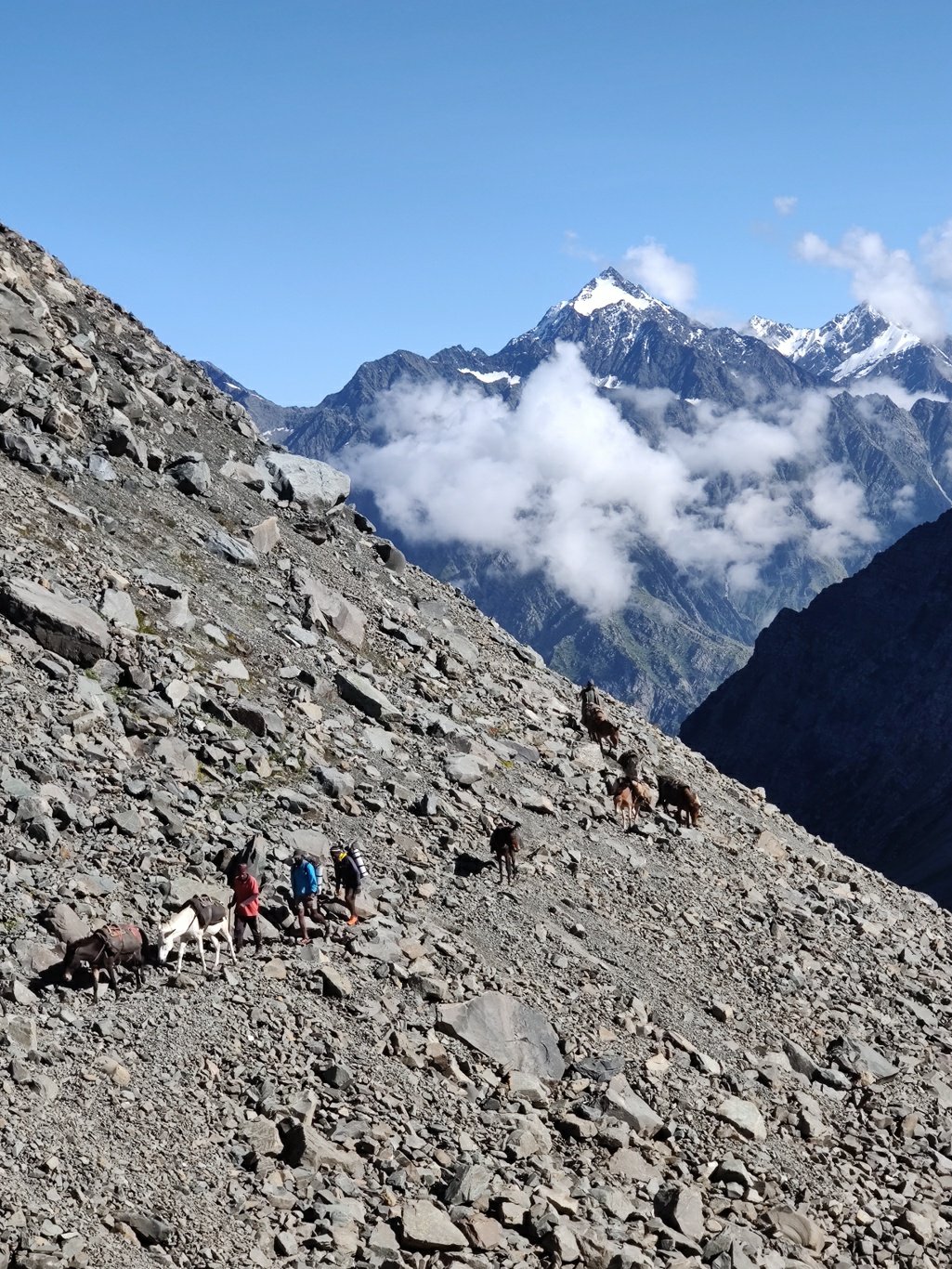 Some 400m below the pass a large glacial lake revealed itself beneath tall rising peaks. The lake was formed by melt water from the glacier hanging from the pass above, water flow blocked by moraines leading to the formation of a large water body. The lake was still mostly covered by winter ice which had not melted yet even at the end of summer. Within two hours we had crossed over from a world of lush green, warm meadows full of life into a barren, cold landscape of rock and ice. 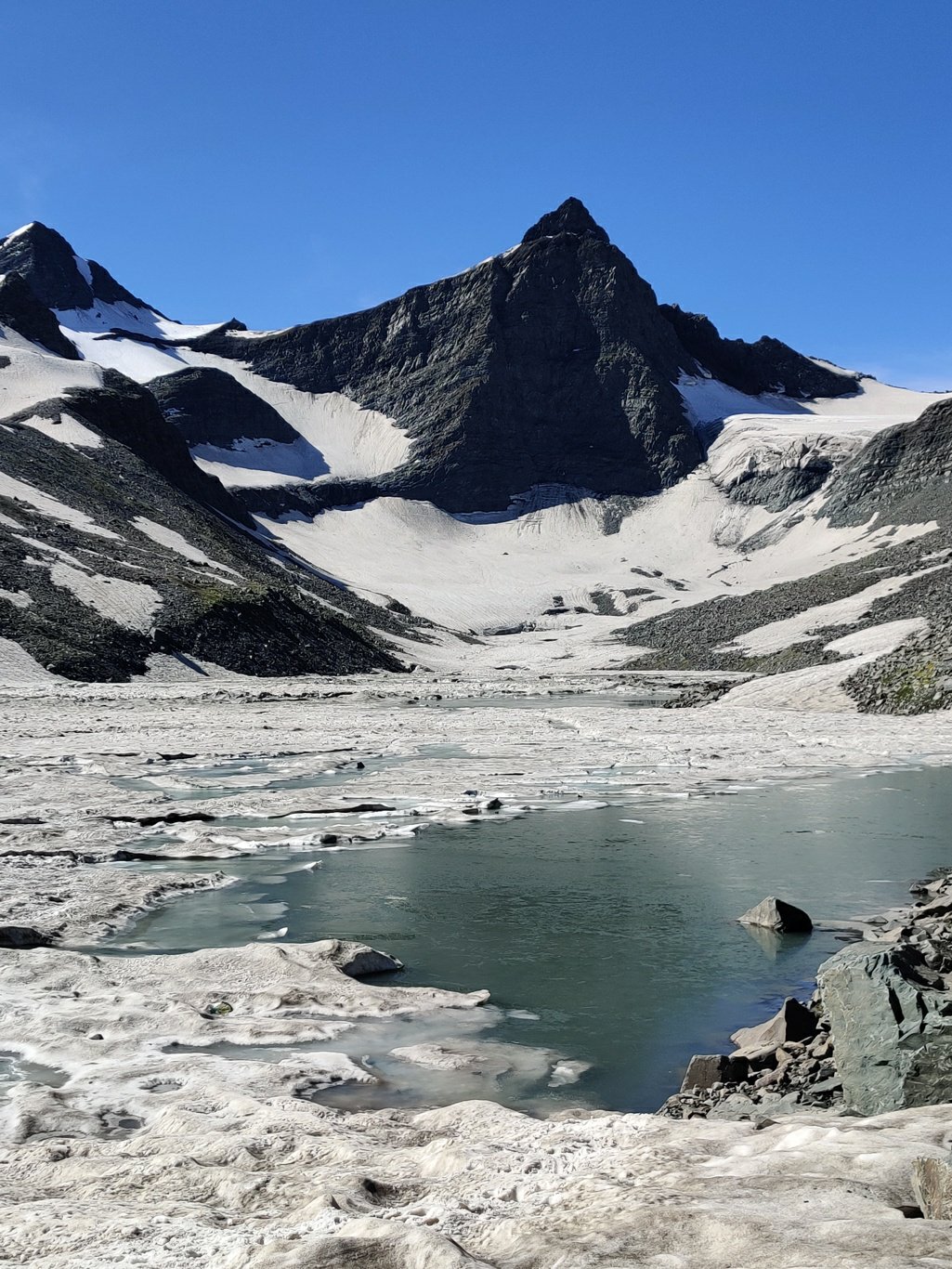 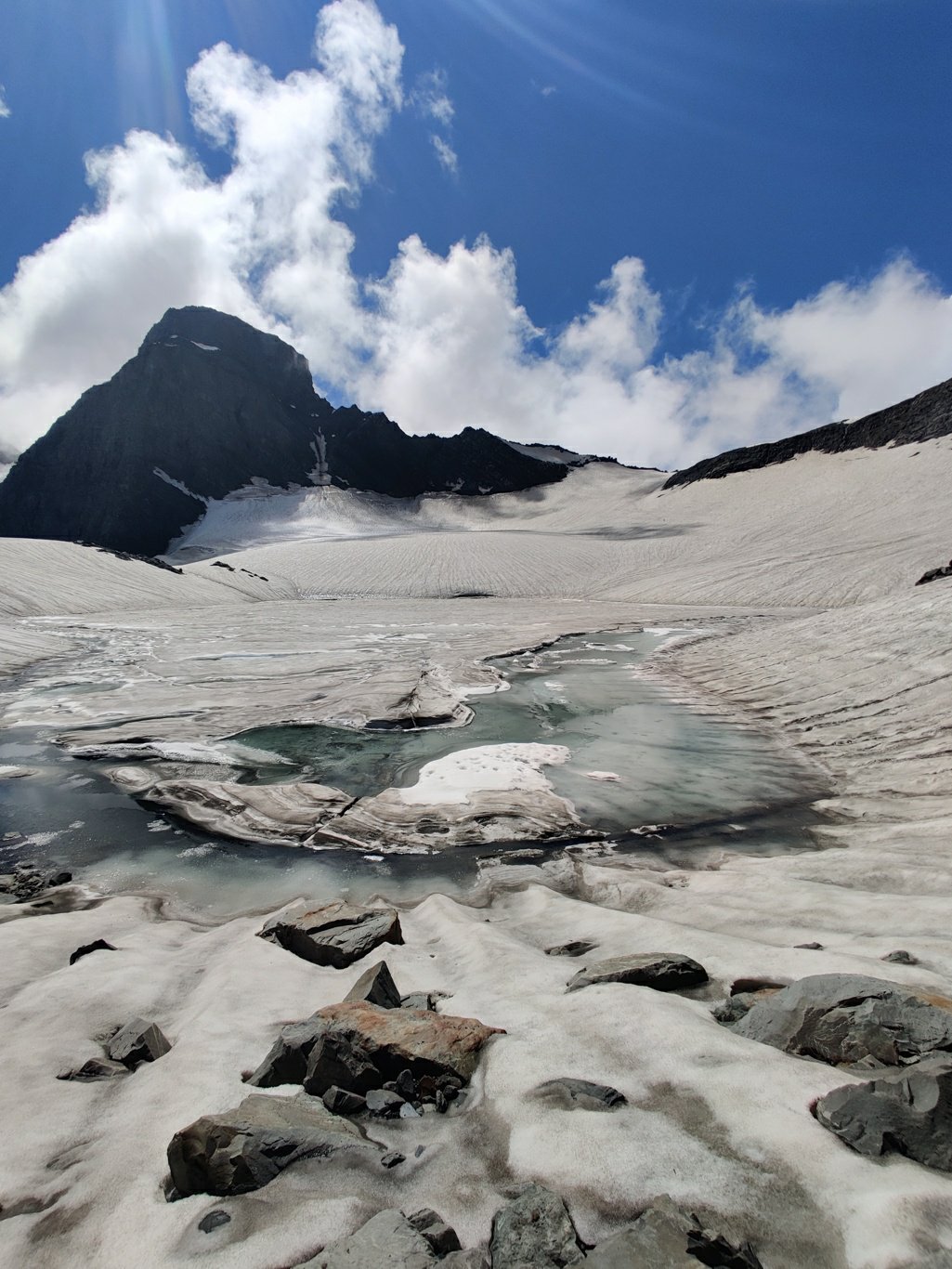 The final section to the pass is quite steep so the trail contours gradually up from the right side. The snow makes it easier to traverse the slope getting better grip on the otherwise slippery scree underneath. On top of the pass there is a small mandir where the locals typically thank the Gods for a safe crossing across the Dhauladhar. After the pass there is a steep 1000 meters drop into the Barot valley. 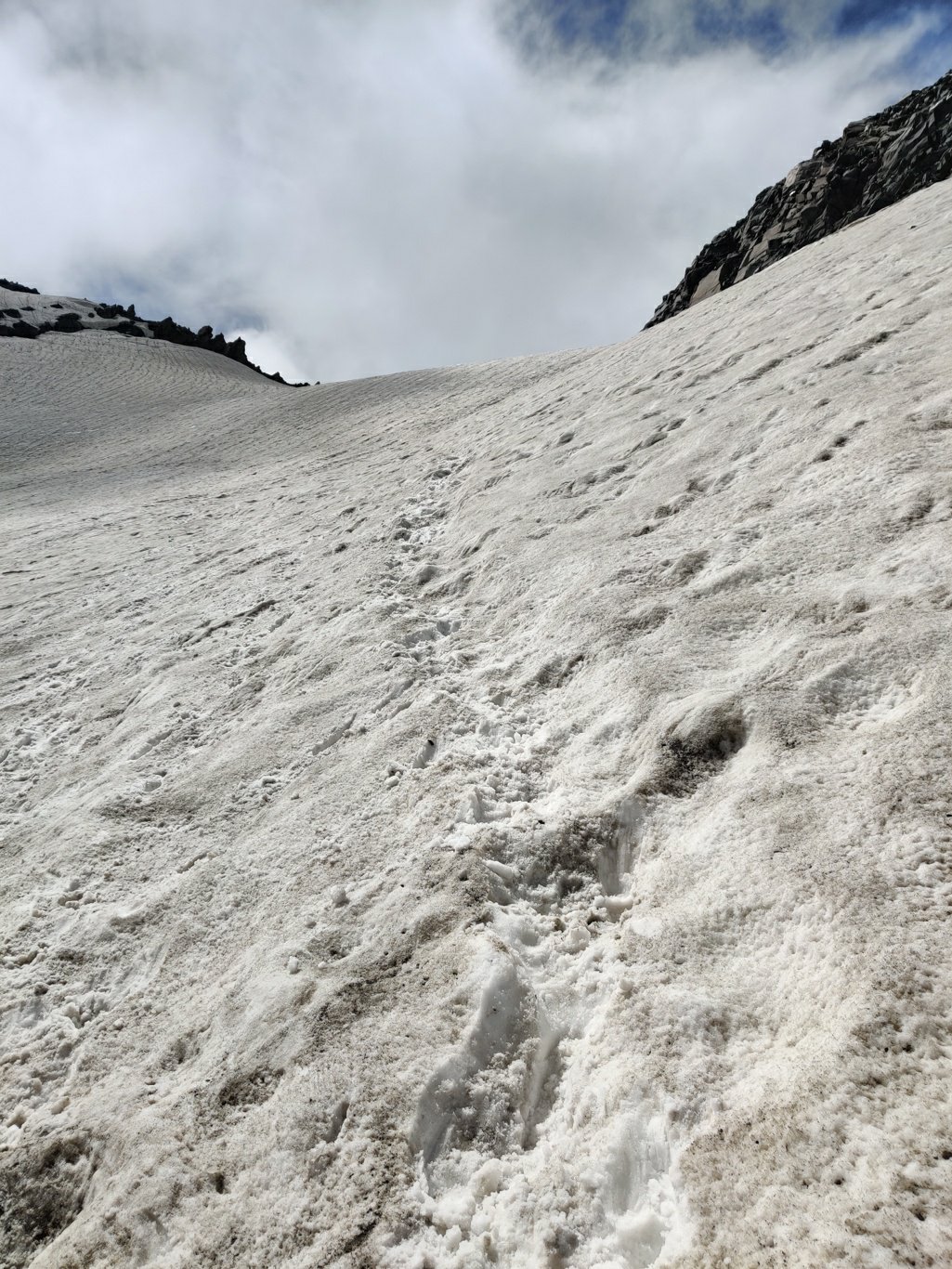 The view from the pass is mesmerizing – a glacial lake partly covered by ice within the snow covered moraines beneath a moving cloud cover which opens a small window revealing the high ranges of the Dhauladhar in the backdrop. We take a moment to sit down and take in these magnificent views which keep changing with the clouds in constant motion. 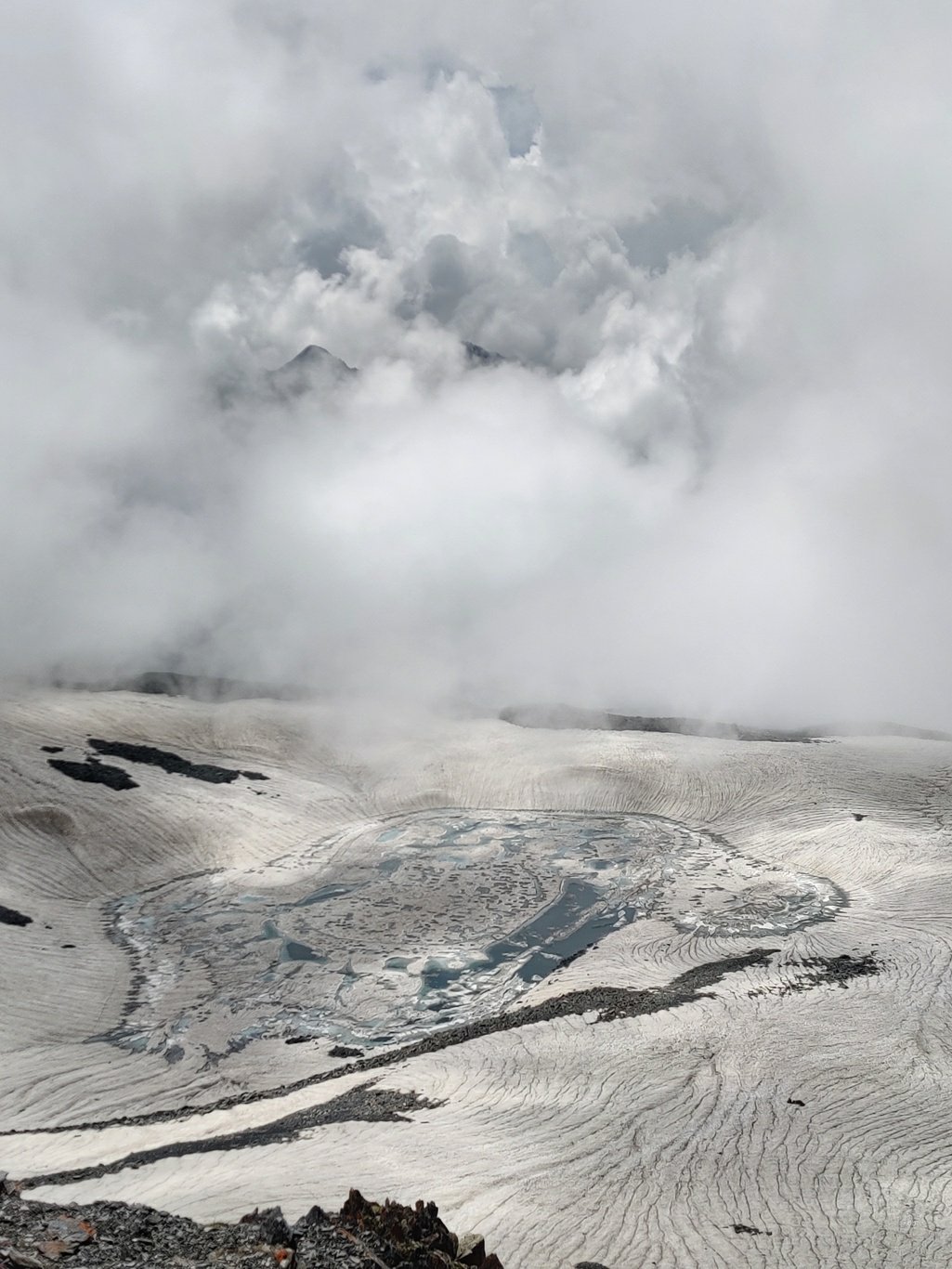 The trail now drops steeply into the Barot valley across moraines and scree partly covered by snow. As we descend to lower altitudes the weather gets slightly warmer and the terrain becomes greener as grass and plants start to appear. The cloud cover opens up and the beautiful green Barot valley reveals itself.  At the base of the pass we meet the horsemen who stopped at a shepherds camp for tea and lunch. 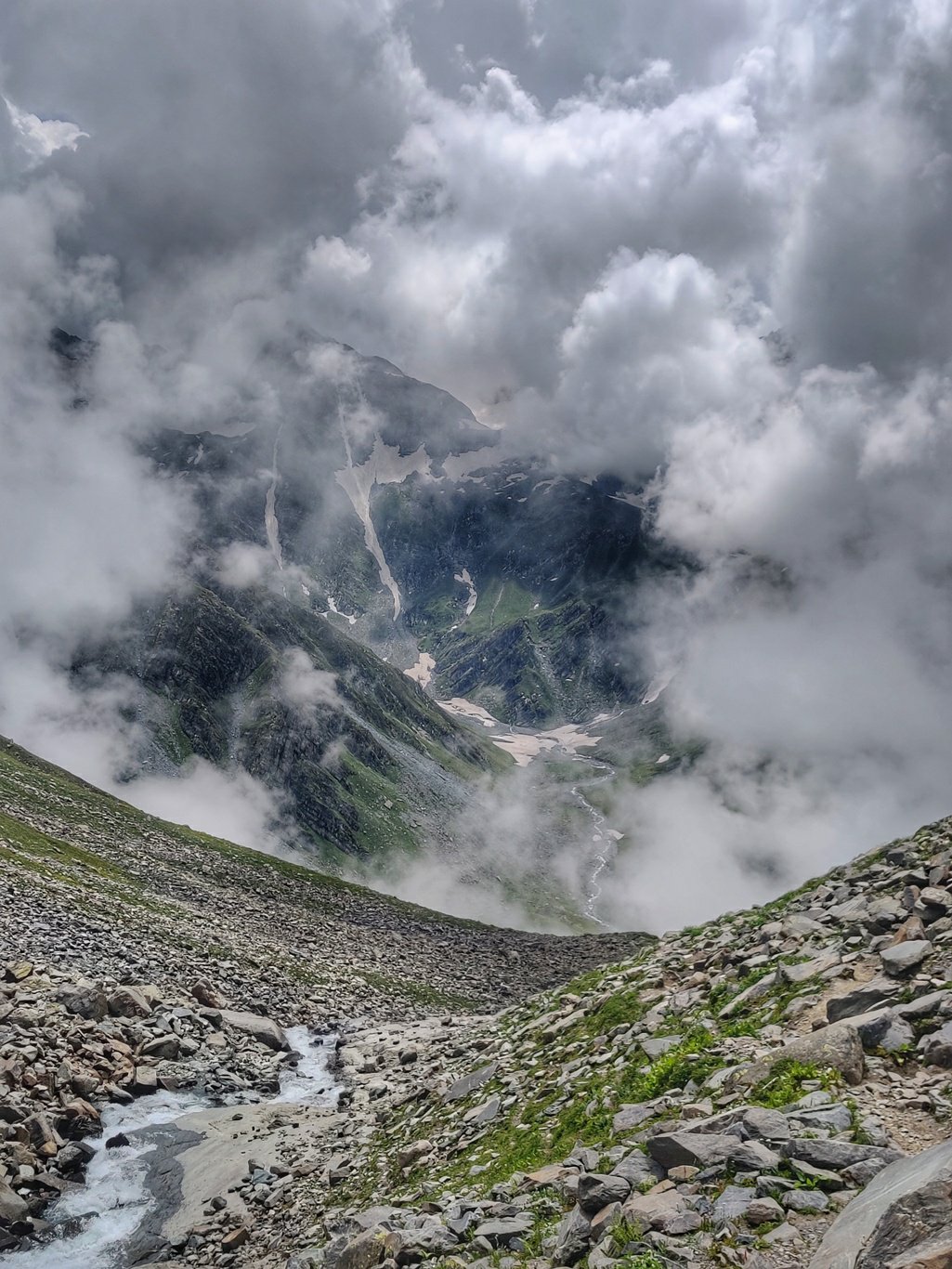 We decide to push ahead in order to reach our destination – Bada Gran – the first hamlet by the end of the day. As we get down the fog thickens and soon we are in a white out with hardly 10 meter of visibility. The main river in the valley below is partly covered by large, half broken snow bridges and the valley slopes on both sides are quite steep and covered by lose soil and scree. 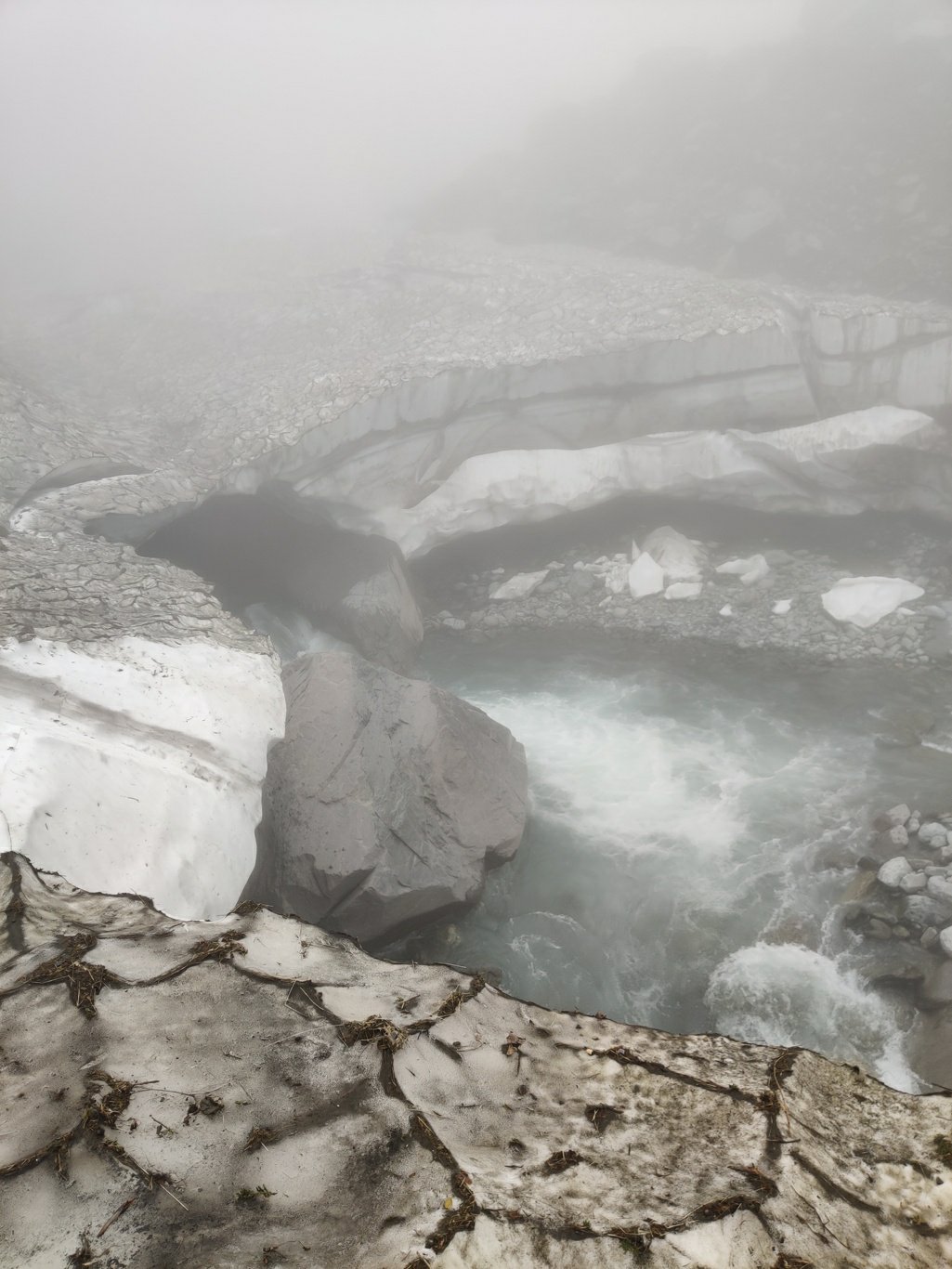 With little visibility for orientation and a difficult terrain we decide to traverse on top of the frozen snow bridges where possible. The stream has already gained so much force that it’s impossible to cross safely. We now proceed half blind in a white, misty world hoping to soon step onto firm ground and find a clear trail. 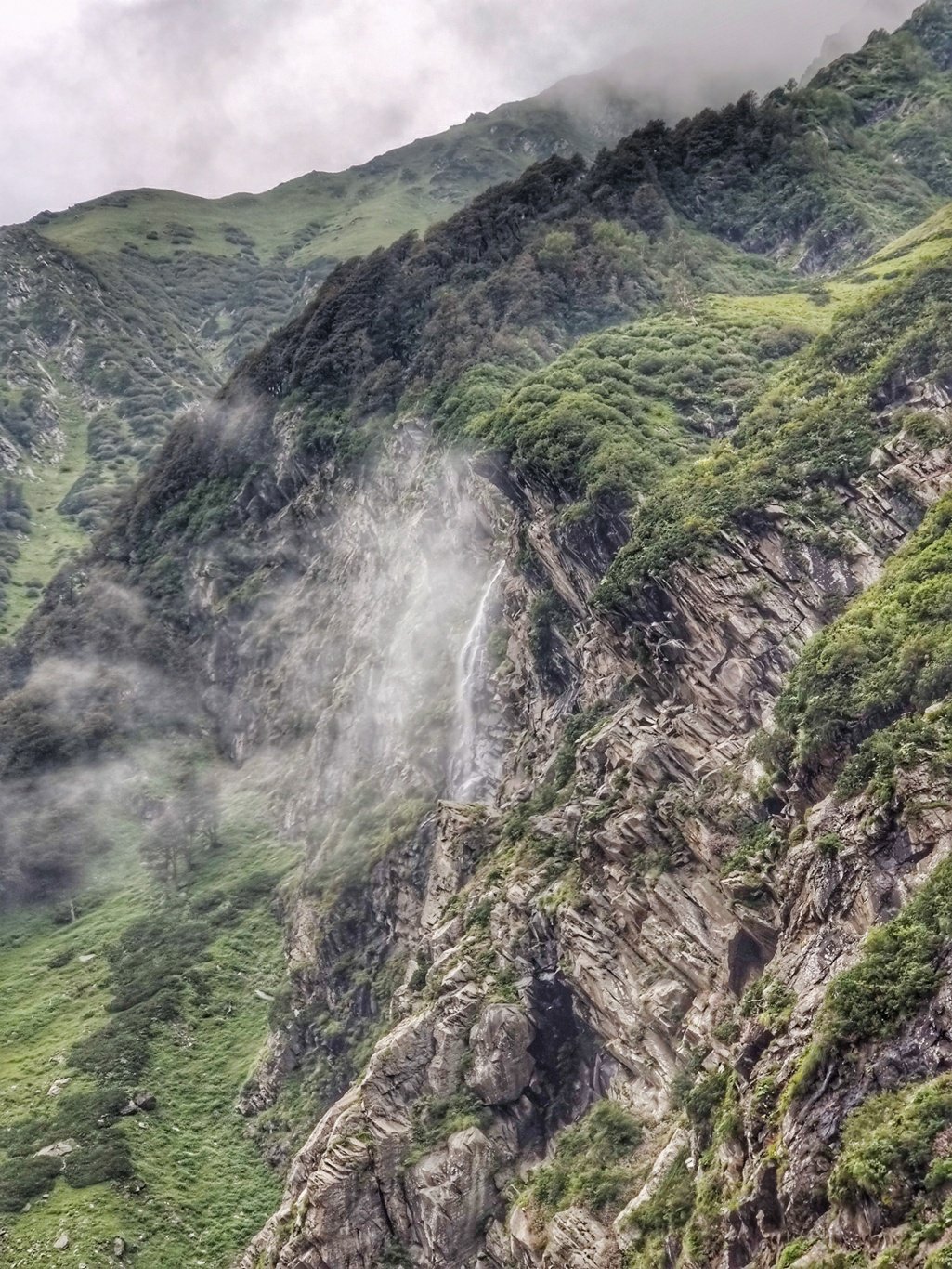 The Uhl river cuts deeper into the surrounding landscape with waterfalls dropping down from near vertical slopes above. After a while the fog clears up and a clear trail forms on the left side of the valley.  The landscape turns from barren rocks and ice to lush green as we proceed further downstream. The thundering glacial river below is still covered by frozen winter snow revealing itself once in a while from underneath. 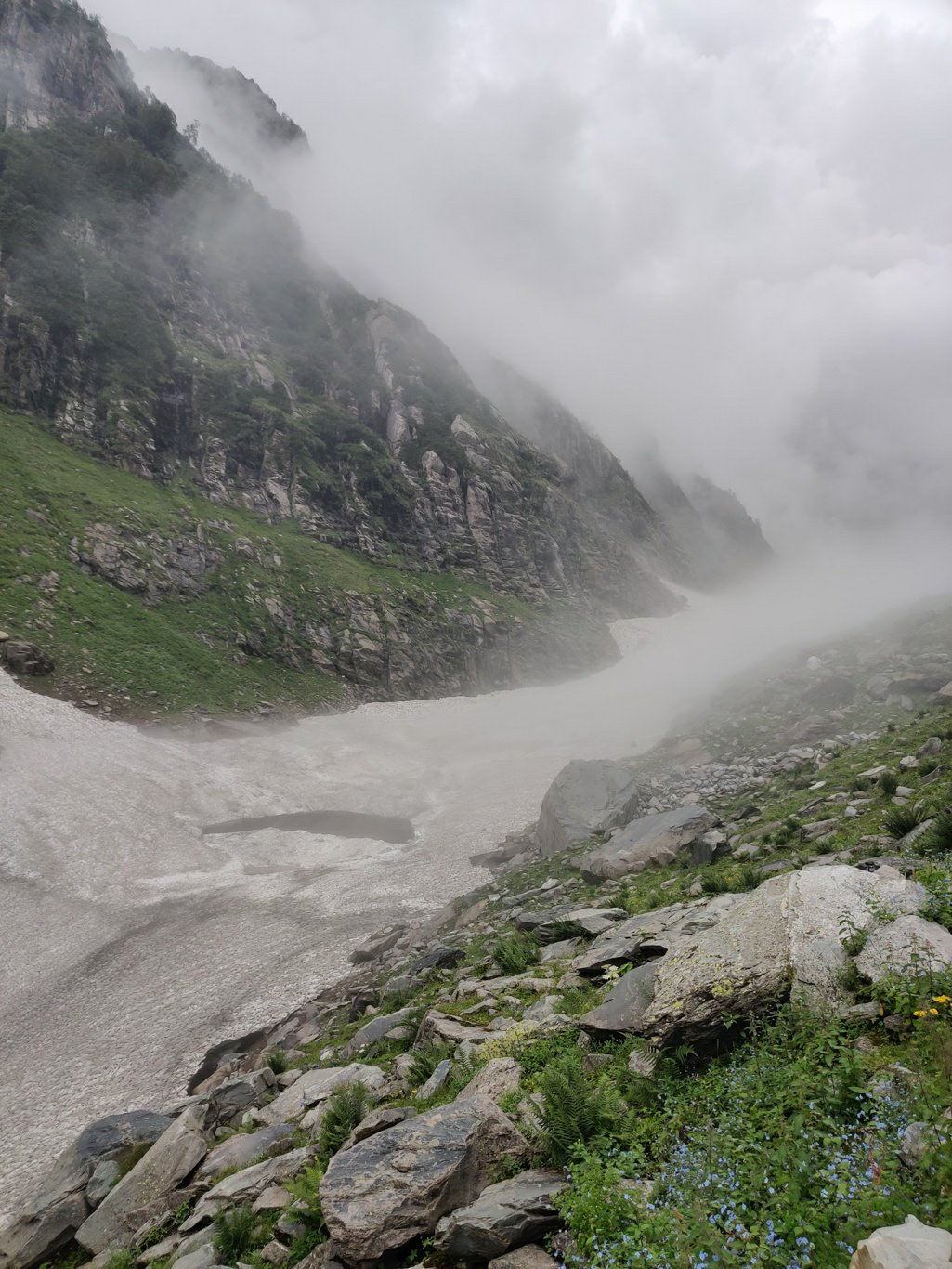 Further down a massive landslide has taken down an entire mountain slope over some 500m wide and 300m high. The upper soil, vegetation and trees are washed away along with our trail. We now have to traverse over steep lose scree and soil. We proceed with utter care as one wrong step and we fall down to our death hundreds of meters into the raging river below. 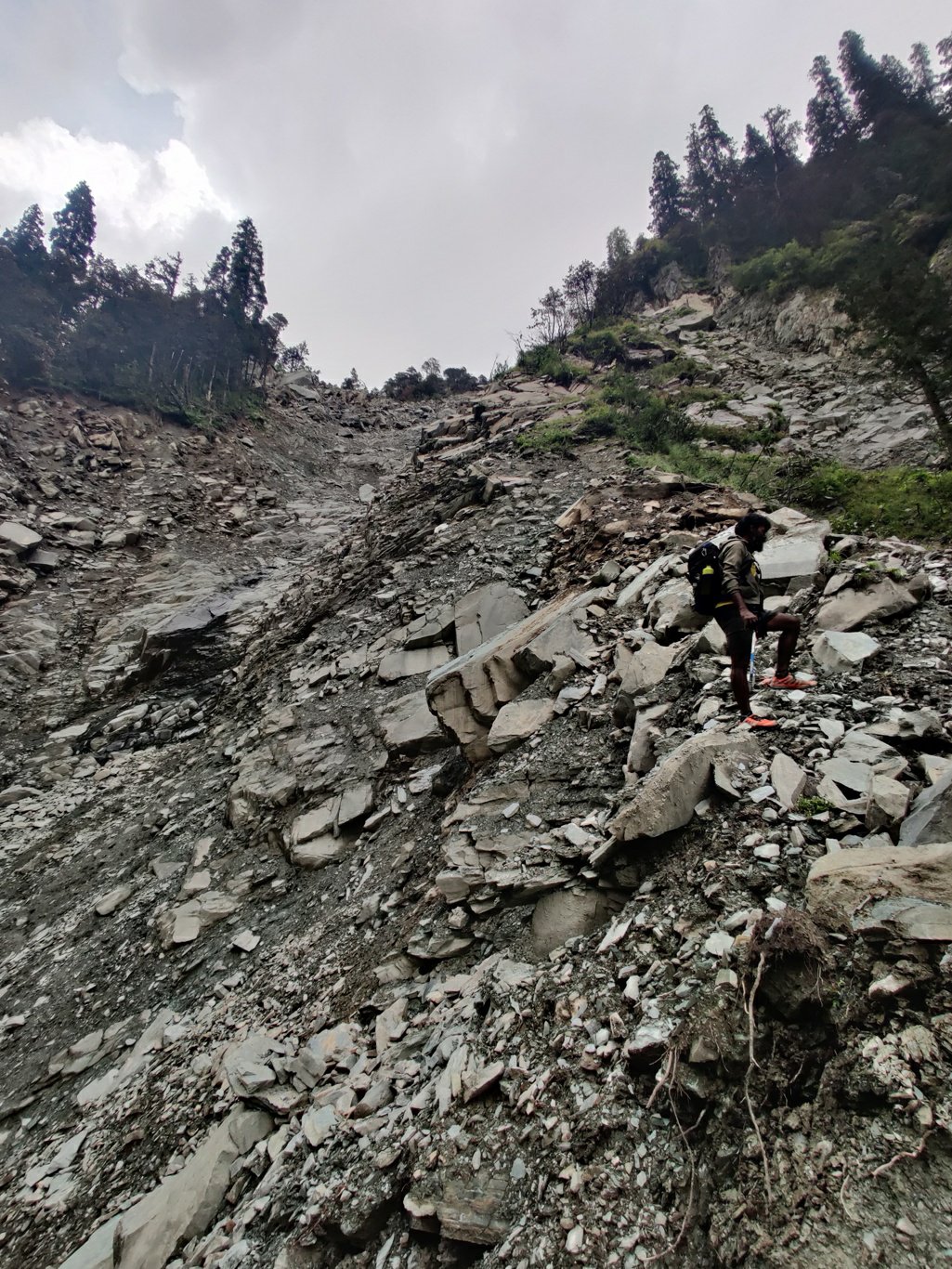 After a precarious 500m traverse over the massive landslide holding on to our lives we end up some 20 meters above the actual trail where we have to climb down free solo over a steep patch with lose rocks and little vegetation to hold on to.  I feel my heart racing in my throat with every step searching for grip onto a small protruding rock and holding on to little roots and plants understanding that I could fall into the deep ravine below. We finally step back onto firm ground and continue our way along the trail which takes us through beautiful forest now. 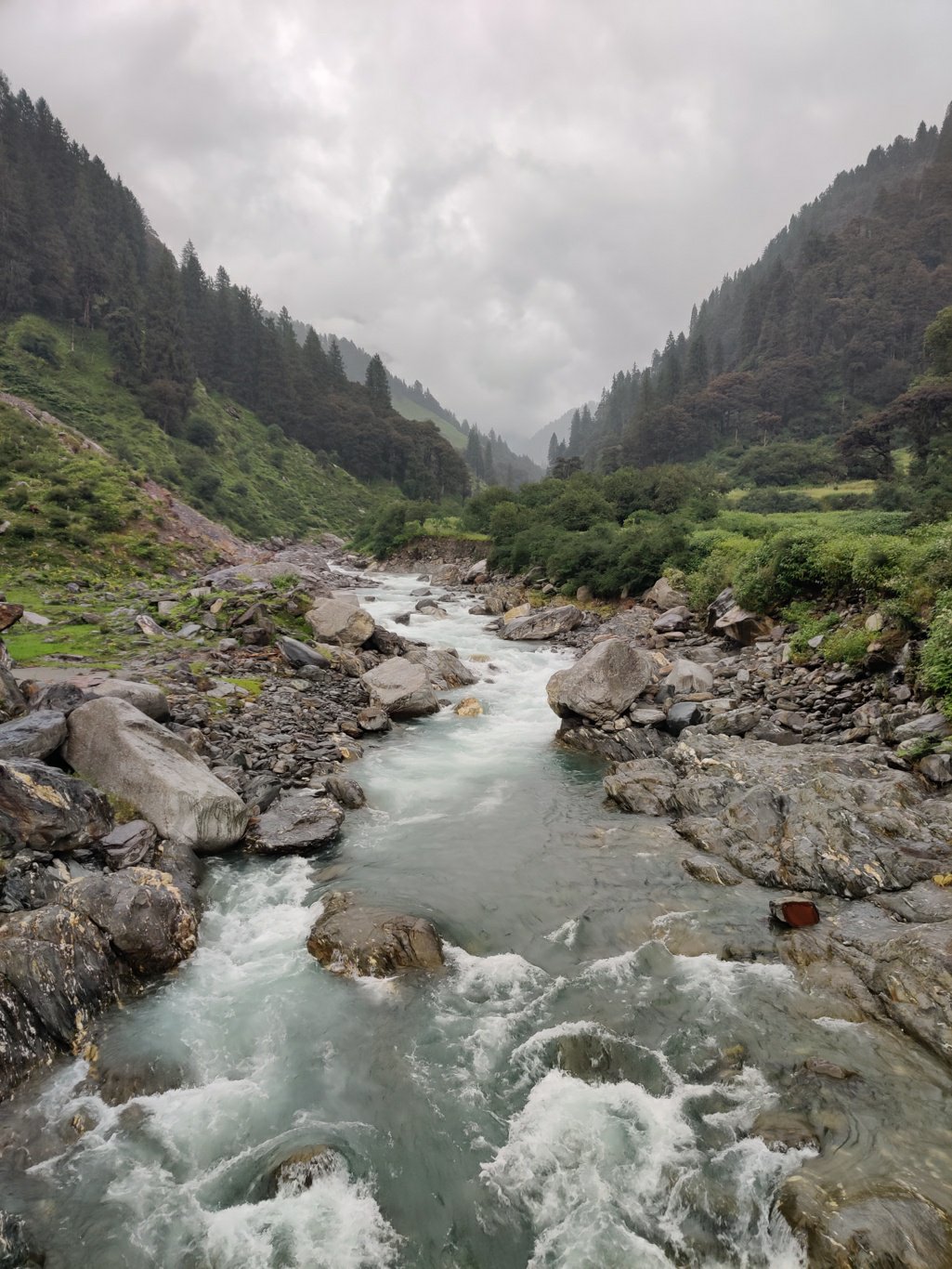 A little while later we have to cross sides again using an old, rusty hanging bridge which looks ready to collapse anytime. We make it across and now proceed through beautiful pine forest down the valley. We finally reach Bada Gran where we barge into a small shop hogging anything that appears edible. It has been a very long day burning some 6-8000 calories across treacherous terrain on a single plate of breakfast. The friendly shop owner kindly offers us a nice room with beds to spent the night. We settle down beneath our warm blankets and dream off to the sound of the heavy raining pouring down on the roof.