Woke up around 5am from an open rooftop at Natwad 1400m at the confluence of the Rupin and Tons. Searched for a tea shop and was ready to head out. Plan was to proceed upstream on a jeep track along the Rupin river towards Dhoni. Just after Natwad there is a forest check post for entry into the Govind Pashna national park. 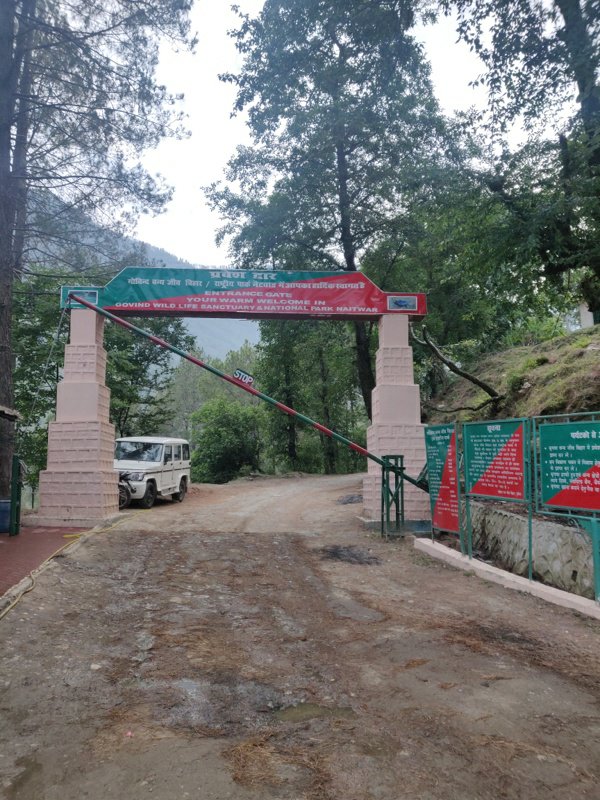 Entry fee is 150Rs for Indians and 600Rs for foreigners. Additionaly you need to get in touch with a registered local trek operator to enter who will also charge you. A bit of a pain for this alpine style explorer. After the checkpost you take a left and cross a bridge across the Tons river. 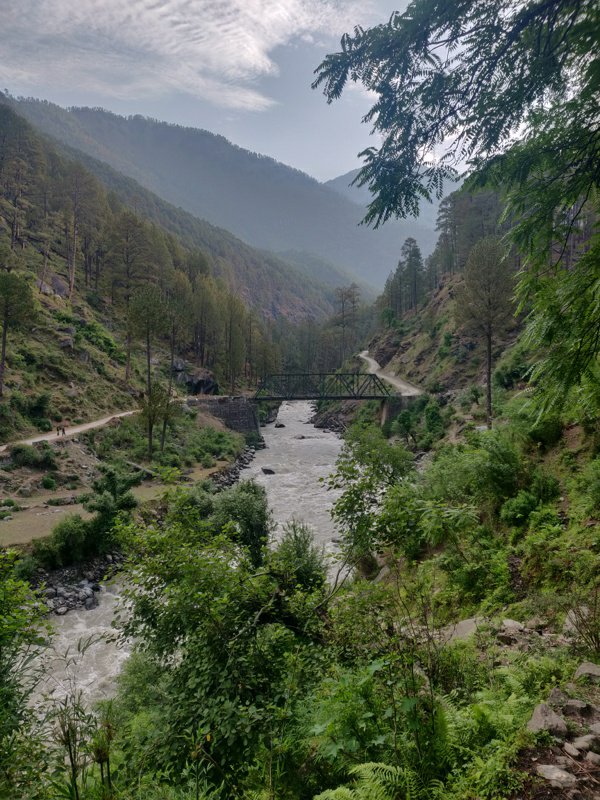 The road goes through the hamlet of Netwar and then enters the scenic Rupin river valley which is pristine and peaceful. As luck would have it I was able to hitch a ride with a local biker till about 2km from the bridge 1580m across the Rupin. Strangely roads on both sides of the Rupin are connected through a pedestrian bridge so no vehicle can move through. 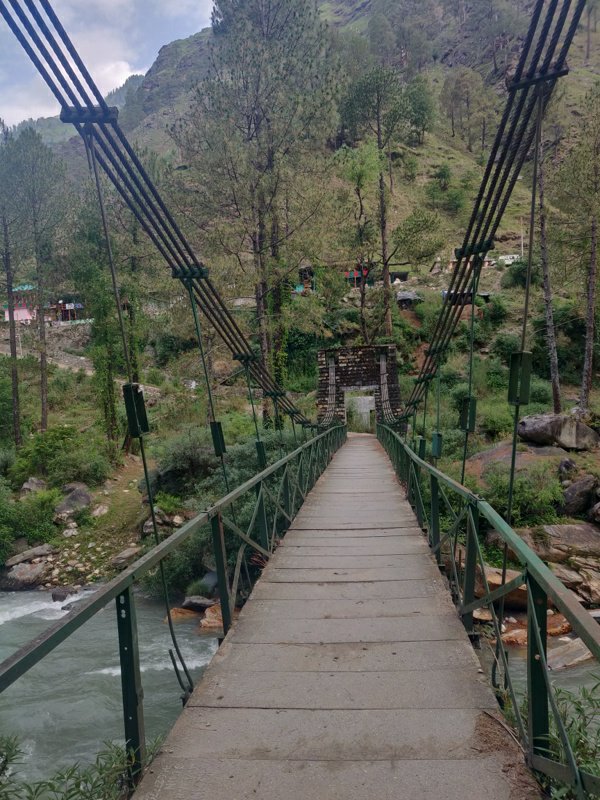 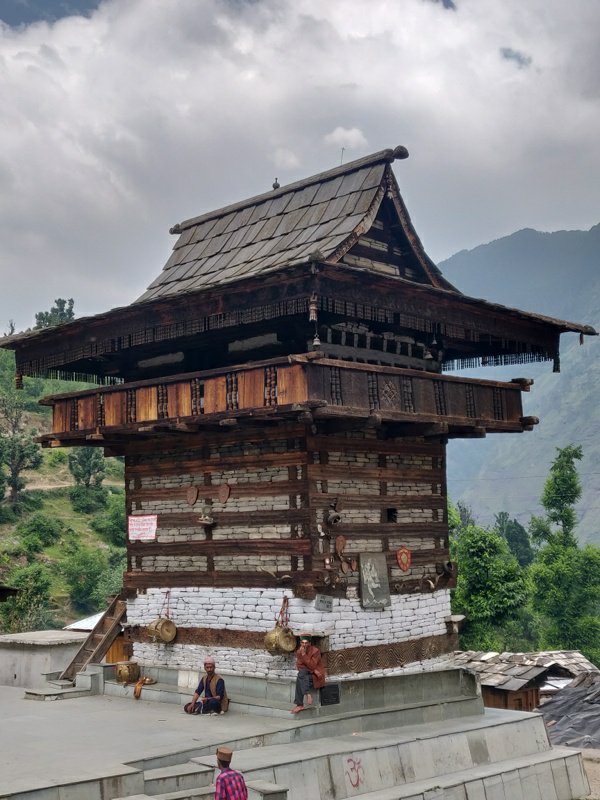 Dhoni is a picturesque village with traditionally built homes and three beautiful temples. I walk through the villages snapping up some photos of the houses built from wood and stone. One of the temples appears to be very old and it’s wooden panels are engraved with beautiful carvings. 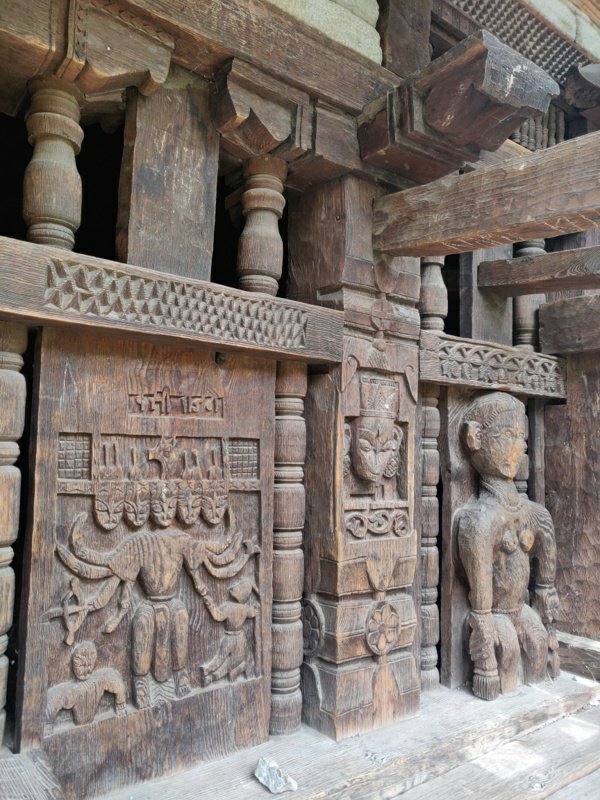 After an early lunch at Dhoni I continued along the road exploring the hamlets in this side valley of the Rupin valley. The road ends at the hamlet of Masri 2150m. Here also there is a beautiful ancient wooden temple with nice carvings displaying trophies and shields. 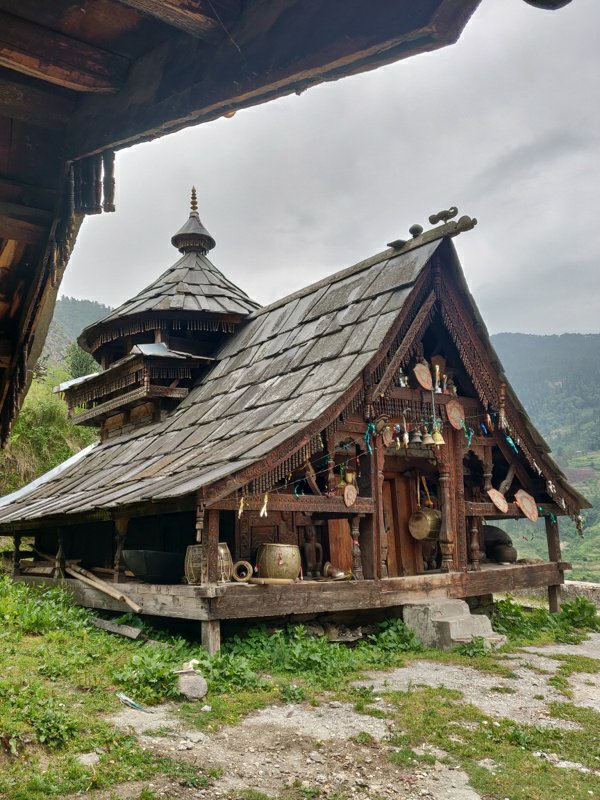 From Masri there is a trail descending to the river where you can cross a bridge and follow a trail below the steep rock face above. Mid way I passed an unnamed hamlet while the rain God’s were lashing down. Built on a big rock overseeing the confluence of the Rupin and the side valley is the picturesque village of Khanna 1780m. 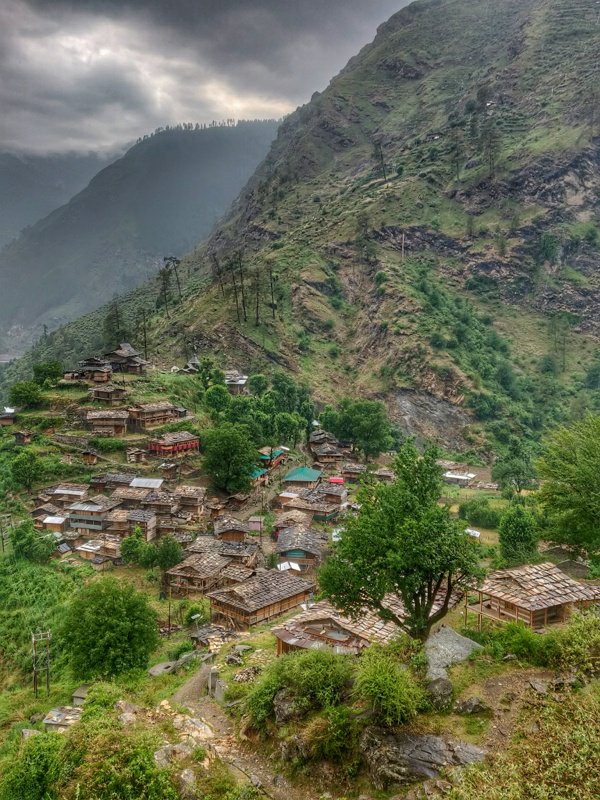 Here the Rupin river comes out of a gorge like valley. The locals showed me a shortcut trail towards my destination Dodra crossing the wild Rupin river over two makeshift bridges. The trail follows the left (upstream) side of the river and then climbs up steeply to the main path where I met a hiking group on their way to the Rupin pass. 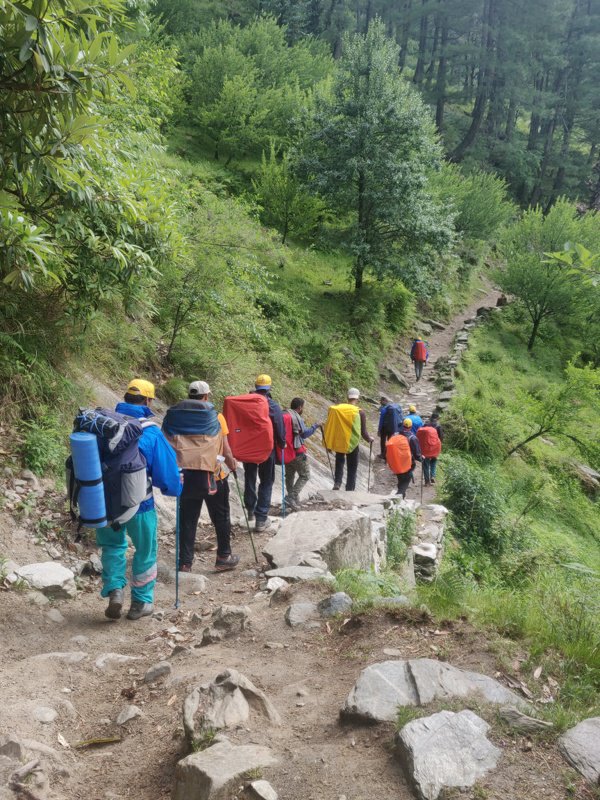 The path runs well above the Rupin river through the village of Sewa 2000m before descending and crossing a left side valley across a bridge 1900m. A little while later there is a left side rock path from the main path that climbs up 500m towards Dodra. Along the way you cross the hamlet of
Gabujadhe 2000m. 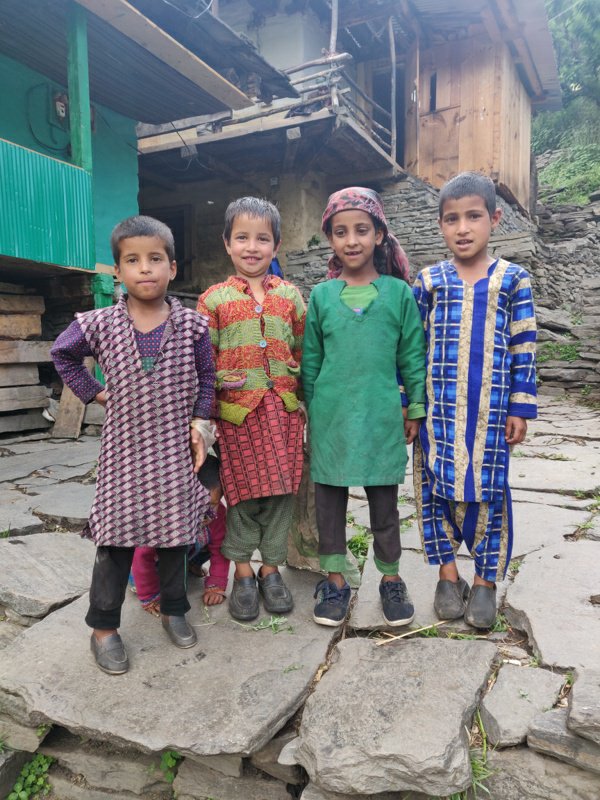 Finally around 5:30pm I reached Dodra, happy memories from last year after the Rupin pass crossing. Met up with the dhaba owner who still recognised me and also Pratap after several days who reached earlier in the day through a different trail. The village of Dodra 2500m is also made up of beautiful homes built with rocks and wood. 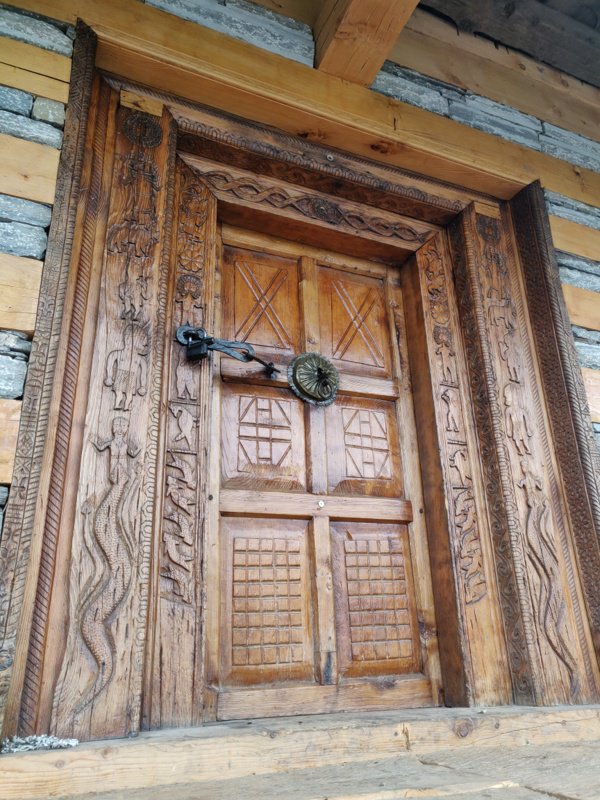 We had a nice evening in the warm dhaba kitchen exchanging stories with the owner, a nice friendly gentleman who prepared yummy aloo egg sabji with rottis. We slept off in a bufallo shed which was warm and cosy in the cold night. 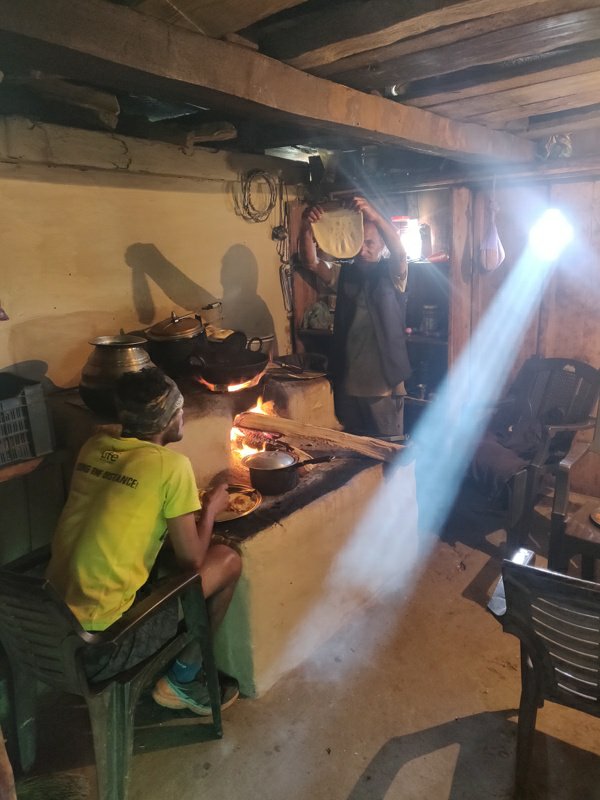 Next morning we rose up early at 5:30am, had too big pooris with alloo sabji and started our ascend of the Chansal pass 3750m through a nice forest trail shortcutting the hair pin road. We climbed up through cool pine forest and scenic flower dotted meadows. Along the way we encountered two large herds of sheep descending into the Rupin valley. 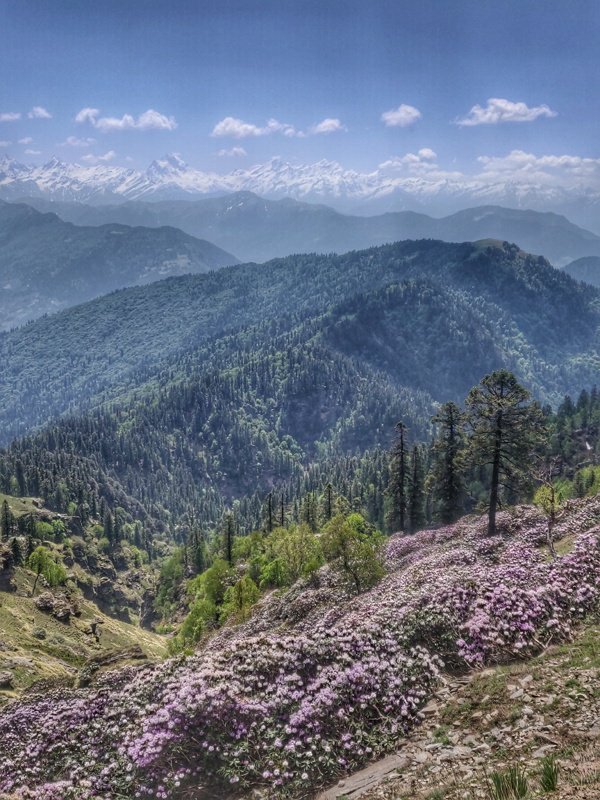 Near to the top we could see 180 degree views on the snow peaks of the Baspa range seperating Kinnaur from Shimla district. As luck would have it, we just finished our selfie near the 27th pass when an empty jeep lorry passed by and gave us a lift down the pass to Rorhu. 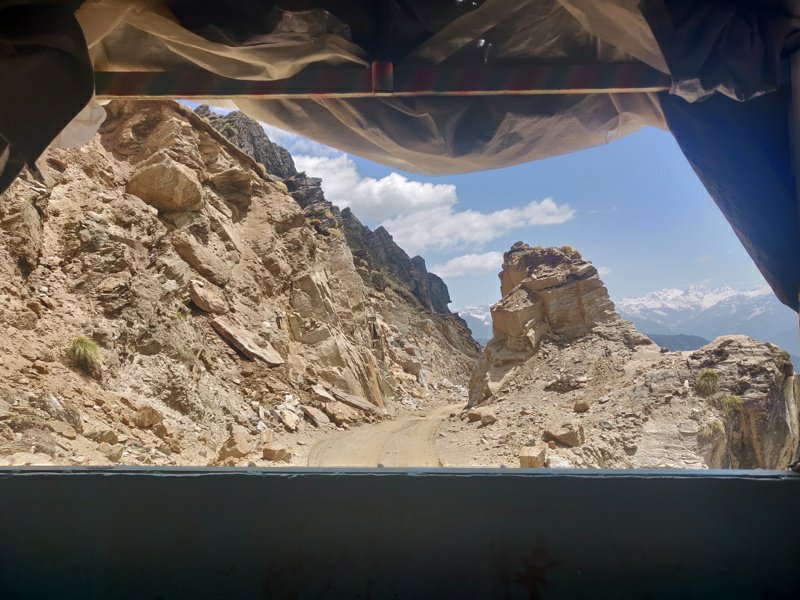 Near Rorhu in the village of Khoni nearto Hatkoti I met up with Pranav Rawat, renowned mountaineer and ice climber, at his beautiful home where we stayed over for the night. Pranav gave us a tour of Khoni a small hamlet populated mostly by his relatives and his apple farm where he experimented with different varieties and scientific techniques to face the evolving environmental and market challenges. 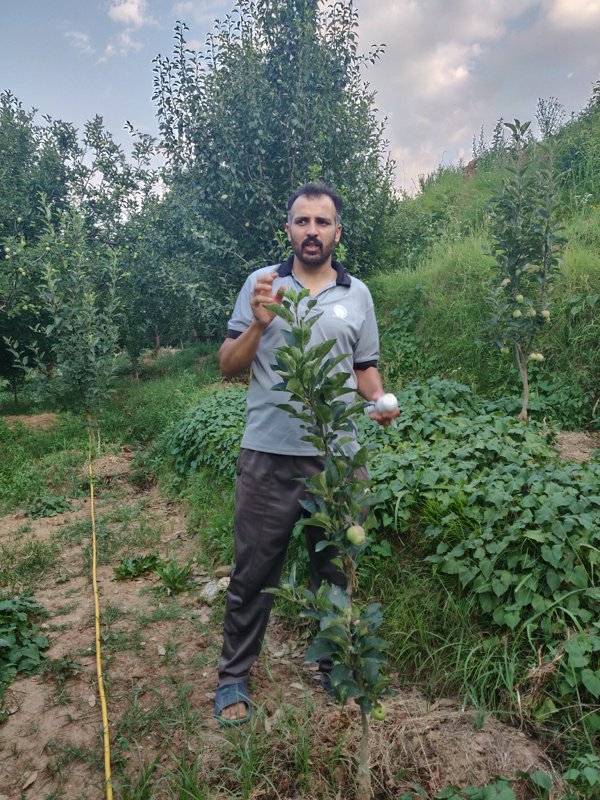 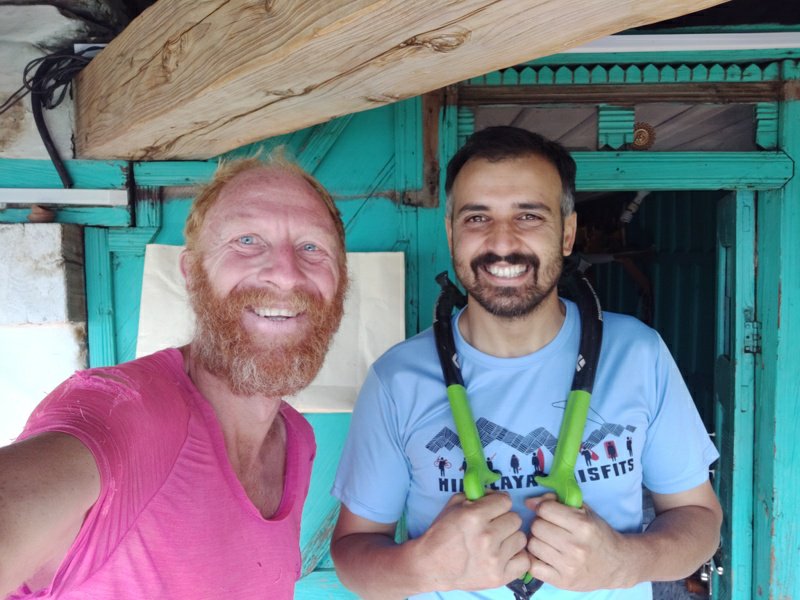 I ended up in Chanikaba Badiar 2200m where a nice family invited me over for tea and lunch. Forest mushrooms and rottis went down quickly. Within a stone throw I passed through two other villages of Pauti 2150m and Gaul 2100m. The trail now descends into the valley to cross the river and climbs up to Kimdhar 2100m another small hamlet embraced by the forest. We had a nice evening in the warm dhaba kitchen exchanging stories with the owner, a nice friendly gentleman who prepared yummy aloo egg sabji with rottis. We slept off in a bufallo shed which was warm and cosy in the cold night. http://ultrajourneys.org/trans-himalaya-2019-natwad-to-dodra-june-6-7/ #Explore #Himalayas #AlpineStyle #Minimalist #UltraRunning